Tech plays a substantial role in the political and social environment outside campus thanks to the tireless efforts of the Office of Government and Community Relations (GCR). Its members work to build relationships with people and organizations in Atlanta, around the state and in Washington, D.C., gaining support for Institute initiatives and making a positive impact at a local level.

“We’re very pleased that the Governor and the General Assembly have supported our primary capital priority, $59 million in bond funds to construct the Engineered Biosystems Building. This significant investment by the state was a product of hard work from a number of partners including President Peterson and his Executive Leadership Team and our Capitol Jackets members, alumni who advocate on Tech’s behalf,” Ray said.

When it comes to legislative priorities and funding, the State Relations team often has to overcome obstacles in their liaisons between Tech and the State Capitol.

“The challenging budget environment over the last several years has fundamentally changed how we advocate for Tech’s legislative priorities. It’s crucial that we demonstrate how our priorities will benefit the state in the long run,” Ray said.

In D.C., the Federal Relations Office works with policy-makers in Congress to reach Tech’s goals. This can be difficult because elected officials and policymakers in Washington have many demands on their time.

“We attempt to overcome this by ensuring that Tech’s voice stands out… [and] that the Georgia congressional delegation appreciates the great work being done by our students, faculty and researchers,” said Robert Knotts, Director of Federal Relations.

“Less tends to get done legislatively in D.C. in a presidential election year, but our advocacy efforts never stop. We work hard to build bipartisan support and give Tech a seat at the table as we respond to the research, technology and innovation challenges posed by the federal government,” Knotts said. 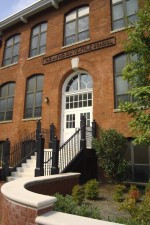 The Community Relations team focuses on working closely with local organizations to improve the lives of Atlanta residents.

“We’re trying to see how we can more strategically engage in community service…finding a balance between interfacing with the Mayor and Atlanta City Council, interacting with non-profits and making Tech a part of that process. For example, we have logistics experts here on campus who can help increase the capacity of the Atlanta Food Bank to serve the community,” said Chris Burke, Director of Community Relations.

Whether they do it by building relationships with Georgia legislators, lobbying with Congress or working with City Council for the community, GCR’s greatest priority is to show that Tech has a lot to offer.

“Fortunately, Tech has a great track record and potential for future contribution to Georgia’s economy. We work with our campus partners to share that message with all of our stakeholders and show them how we make an impact in their communities,” Ray said.