At an institution primarily dedicated to engineering, the Ferst Center for the Arts has, for over 20 years, provided a major gateway to art and entertainment at the Institute. Throughout its two-decade existence, it has hosted renowned artists and personalities and also been the site for thrilling performances throughout the years.

Since its founding in 1992, the Ferst Center has played host to renowned speakers, artists, and personalities. Originally named the Georgia Tech Theater for the Arts, the Center was renamed in memory of Tech alum Robert Ferst as a measure of appreciation for his contributions and financial support to the Institute.

The Center was built as part of a series of construction projects in the early 1990s and was meant to serve a specific purpose on campus.

“[The Ferst Center] was constructed around the same time as the Student Center. The campus wanted an art center to have a space for performing art and visual art display, a well-rounded environment, and a bridge to the external community,” Lee said.

Over time, the Center has seen few changes in its external and internal appearance, but plans are underway to upgrade the building.

“The basic layout has remained the same, although some big changes to the building and some planned renovations are set for the upcoming year,” said Christine Dregar, Client and Patron Services Manager for the Ferst Center. “Architects were selected last year for a redesign of the front of the building.” 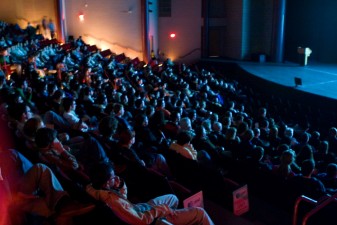 Over the years, a number of influential personalities have been featured at the Center. Then-Vice Presidential candidate Al Gore in 1992, U.S. President Bill Clinton in 1996 during the Summer Olympics in Atlanta, television host Oprah Winfrey in 2010 and 2011, and comedians Bill Cosby, Adam Sandler and Carrot Top are among the most prominent figures to appear at the Center, but others have put on impressive performances as well.

Dregar listed George Winston, a famous pianist who has repeatedly rendered performances at the Ferst Center for about 10 years, and Willie Nelson as her favorites.

The performers are given just the right amount of rehearsal time before their performances.

“Companies come in three to four days prior to the event, but a comedian can come in and walk on stage, and that’s it,” Dregar said.

Despite the preparation, the Ferst Center staff needs to be on full alert in case anything goes wrong.

“We have a backup plan to the backup plan. Some of the problems in the past have been power troubles or show cancellations due to unforeseen circumstances, but in all situations, the Ferst Center staff has been well prepared for dealing with issues,” Lee said.

Recently the Ferst Center partnered with Student View, an exhibit of artwork by Tech students during the months of December and January. The center’s partnerships have often extended beyond Tech-affiliated organizations in the past, however.

“Probably the largest exhibit we have hosted was The Hewitt Collection of African-American Art in 2005, which featured works by Jacob Lawrence, Romare Bearden, Hale Woodruff and many others.” Lee said.

Acting as the branch from which events like Campus Moviefest, DramaTech, and InVenture all stem, Ferst has, over time, established itself as the heart and soul of all things creative here at Tech.

The InVenture prize, an invention competition, is televised to a large audience on Georgia Public Broadcasting from the Ferst Center.

Campus movie festival (CMF) is the largest student film festival, held in many colleges in the US. Students make short films on a variety of subjects that compete for different categories. The Ferst Center has hosted the CMF finale for the last few years.

By supporting such events, the Center has set a great example for other departments on campus. The Ferst center has played many different roles, from hosting to supporting creative endeavors. It celebrates its 20th anniversary on April 13.