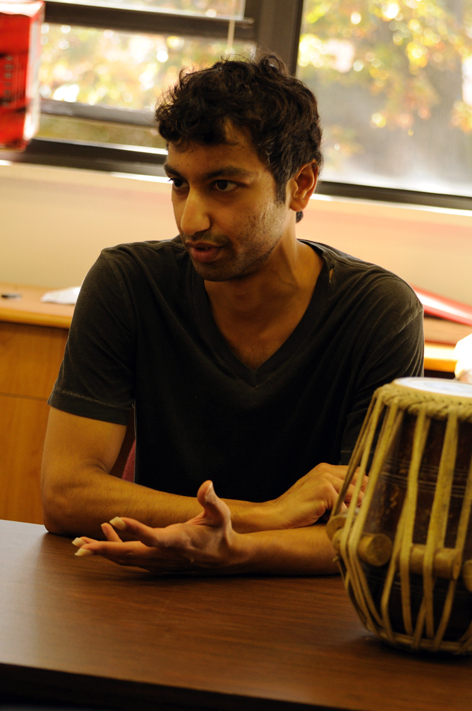 “If I had told someone five years ago I wanted to start and work for a company that created artificial intelligence for music-based applications, they would have laughed,” said Parag Chordia, Chief Technical Officer of khu.sh, a company that has changed AI in music to anything but a laughing matter.

Chordia is also a Professor at Tech, Director of the Music Intelligence Lab and part of the Center for Music Technology. It was his research with graduate student Xiang Cao that led to the development of LaDiDa, a reverse karaoke application.

LaDiDa allows the user to record their singing, choose a musical type, and then play the recording back with an automated melody added. The app also has pitch correction, so it makes you sound good even off-key.

“We were thinking about automatic accompaniment. With LaDiDa, the constraints are whether the chords fit the note and whether they make sense in the progression of chords,” Chordia said.

To find the answers to these questions, Chordia and Cao used a generative modeling system based on statistics: a machine that had listened to a lot of popular music and recorded the statistical data from the chord progressions so that it “knows” what sounds good.

The end result is an app that takes the chords and the style of music chosen and generates the music in real time.

After completing the research, Chordia and Cao realized they had a product with commercial potential, but it was Chordia’s wife Prerna Gupta, now Chief Executive Officer of Khu.sh, who really pushed for the creation of the company.

Tech’s Venture Lab and Shotput Ventures, an angel-investing company based in Atlanta, provided the start-up funds for Khu.sh in May 2009 and by September 2009, LaDiDa launched.

“For the first five or six months not much happened. Then around Jan. 2010 we added pitch correction, and now it’s one of the top ten music apps,” Chordia said.

Being based at Tech has been instrumental (no pun intended) to the company’s success because of the wealth of resources available. Not only were they able to receive phase one and phase two funding from the Venture lab, but they have also had the benefit of Tech’s Center for Music Technology, one of the largest music technology programs in the country (second only to Stanford’s), with several researchers funded by the NSF.

Having a top-ten app didn’t stop khu.sh’s creative impetus. Members of khu.sh realized that while LaDiDa lowered a user’s inhibition to sing, they were still feeling some reluctance to singing into the app, and simply talking doesn’t achieve the same effects. This realization led to the development of Songify.

In July 2011, the company released a new app in partnership with the Gregory Brothers: Songify. Like the Gregory’s Brothers famous videos of auto-tuning the news, Songify turns speech into music. The difference between Songify and LaDiDa is that the music is generated in real time, so the user is encouraged to sing along. The app was wildly successful, becoming the number one downloaded app in the world for two weeks in July.

Recently, khu.sh has released a third app, Talkappella, which is a harmonization app that  the four parts of the harmony from just the user’s voice. The company expects to be releasing two more apps soon, one in Dec. and the next early next year.  Find more information at http://khu.sh/