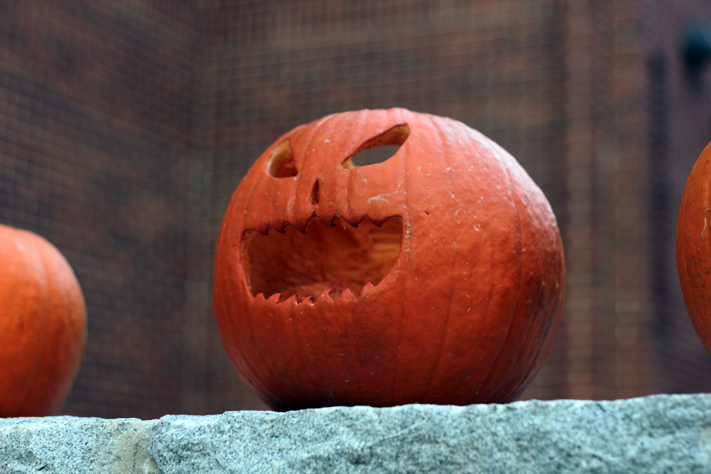 There’s nothing that silently screams Halloween more than the shadow of a candle flickering through the goofy gap-toothed grin of a Jack O’Lantern sitting on the front porch.

As the folklore goes, a blacksmith named Stingy Jack tricked the devil and made a bargain that when Jack died, the devil could not claim his soul. His ghostly presence was referred to as “Jack of the Lantern” but in time simplified to “Jack O’Lantern.”

The Irish began carving scary faces into turnips to ward of Stingy Jack and other evil spirits, but once the tradition was brought to the Americas, it was discovered that a pumpkin made the perfect Jack O’Lantern.

These days Jack O’Lantern’s have taken on a more diverse role than dismissing dark forces. Walking down any suburban street around Halloween, it is hard to miss the plethora of silly, goofy and often artistically impressive faces flickering in the darkness.

Most freshman dorms have Halloween programs this week which give people a golden opportunity to both observe other pumpkin carvers as well as give it a whirl themselves. Carving a pumpkin is not a difficult task to learn, but it requires patience and persistence to make something great. It had been about five years since I last carved a pumpkin and I’ll admit I was fairly anxious about how things would go, but with the advice of other carvers and some other tips, everything turned out swell. Here is the list of tips I followed:

Choose a plan for the pattern you want to go in with or you could end up with a very abstract face or just a mess.

The heavier the pumpkin, the thicker the rind, which is useful for complex patterns or faces. I was fairly ambitious in my pattern choice, so I opted for a pretty thick pumpkin.

Cut a circle in the top and scrap out the insides. This process usually get messy so a drop cloth is recommended.

4. Trace/draw your design onto the pumpkin

This will keep you on the right track and hold together the proportions of your design.

This is the tricky part, but with the right tools (a pumpkin carving kit), steady hands and a heaping portion of patience, your design should come out splendidly.

Just like any masterpiece, your carving will need refinement. Make sure cuts are clean and concise. This will ensure sharpness in you shadow.

So there you have it. Just wipe the pumpkin off with a paper towel to clear off any remaining pumpkin guts, throw a tea candle in the center and voila! Even if you haven’t carved a pumpkin in years, try it, not only will it look sharp on the front stoop, but the process will bring back memories.