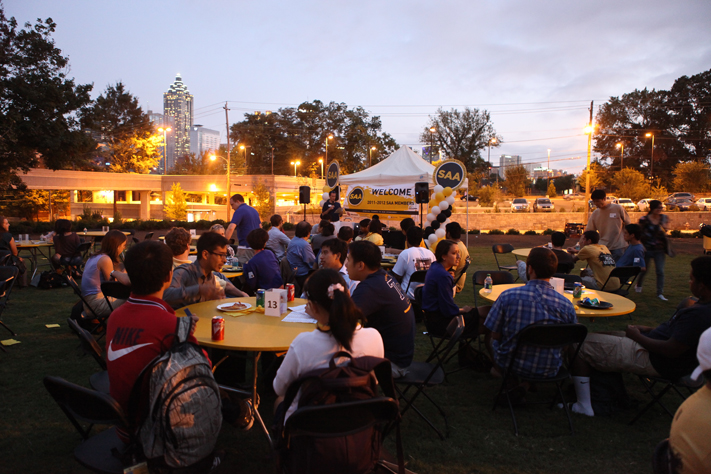 Founded one year ago, the Student Alumni Association (SAA) is working to increase connections between current and former students in several different ways, including a recruitment drive which was held on Thursday, Sept. 15.

The kickoff this past Thursday was intended to draw new members to the SAA while encouraging past members to rejoin. At the event, students could register to join and receive a free chicken sandwich and drink, courtesy of Chick-fil-a.

“[The event] was very well planned, and the sponsor, Chick-fil-a, made sure it would draw a lot of people,” said Donovan Shuman, a first-year ALIS major and first-time member. This statement was corroborated by the long lines of people in attendance at every location.

Shuman also said she decided to come out to the event and join SAA in order to develop a network of connections among the Tech community.

Rahim Panjwani, first-year AE and ECON said, “I decided to attend in order to meet with alumni and build my network.”

Most of the attendees at the seven different host locations had heard about the event through email.

The day’s events did not just end with the morning kickoffs however. That evening, new members were treated to a free dinner catered by a Tech alumnus, chef Riccardo Ullio, CE ‘90, MS ENVE ‘93, on the Tech Tower Lawn.

At the event, SAA members had the chance to win several door prizes, and those who did not register online or in person that day had the opportunity to do so at the door.

Students who attended were also able to meet and have dinner with alumni representing their employers and companies.

The event also served to introduce new members to the history of the SAA as well as to inform them of the organization’s goals and upcoming events.

The SAA was founded in Fall of 2010 as a way of connecting the diverse group of people that is the Tech community through common traditions and interests.

The organization gives students an opportunity to network with past and current Tech grads while learning more about Tech traditions.

In order to facilitate these goals, the SAA has put on a number of events, including Dinner Jackets and Mentor Jackets.

Dinner Jackets is an opportunity for SAA members to network with Tech alumni, learn about their careers and interact with fellow students, while Mentor Jackets is a year-long mentorship program designed to assist SAA members with preparation for life after college.

Another category of events offered through the SAA is Get Ready for the Real World, which hosts events ranging from alumni speakers sharing their life stories, to panels to leadership discussion panels, to networking events and more.

When asked about the level of commitment required, Stephanie Hancock, a second-year MSE, said that “participation is relatively easy, and you only have to devote the amount of time you want to.”

Dues are $10, which grants students one year of membership as well as a “swag bag” full of freebies.

For Justin Rowland, a fourth-year BME and President of the SAA, it has become “a large part of [his] life, and has presented [him] with plenty of changes for good leadership development, while working to make a difference in the Tech community,” and other returning members concur that involvement with the SAA has truly been a rewarding experience.

For students who missed the kickoff this past Thursday, signup is still open online through www.gtsaa.com and members may also join the Official Tech Alumni Association LinkedIn group.