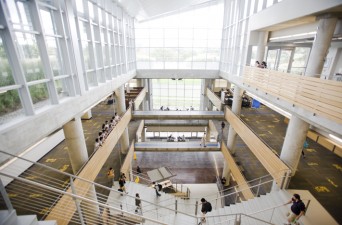 Ever felt like a lab rat in the maze of seemingly endless maze of construction on Tech’s campus?  The past few years have brought all kinds of development projects focusing on key areas of campus that most need improvement, but the detours and inconveniences of the process have also frustrated students who endure the thorn in their sides also known as Tech construction.

The Clough Commons is a state of the art building constructed to help redefine the center of campus. It is aesthetically pleasing with cutting edge technologies in place and is surrounded with a new age feel.

The North Avenue Dining Hall and the Indoor Football training facility have been the other noticeable additions to campus. Various other small improvements like refurbishing Brittain dining hall and the reopening of the Burger Bowl are more subtle, but other changes are still underway.

Vice President of Development at Tech, Barrett Carson, unveiled upcoming projects which include a new Engineered Bio-systems building, an expanded home for Electrical and Computer Engineering, the extension of the Alumni Center, and the renovation of the Ferst Center for the Arts.

Carson explains that these projects are all possible by both philanthropy on the part of alumni and other donors, plus the income derived annually from the permanent endowment.

Although the improvements are welcomed by students and staff alike, much of the student body gets frustrated by the obstacles associated with constant construction.

“Construction is a part of Tech life and all, but it can really be a pain,” said Ben Dupuy, a fourth-year EnvE major who has witnessed construction since 2008. The closing of Skiles Walkway last year in preparation for the Clough Commons and the work on North Avenue’s sidewalks over the past couple months resulted in walking detours and subsequently over-crowded buses.

Despite all the work that has been put into Tech’s face-lift, students still have many suggestions as to what areas on campus need a makeover.

“Housing in general should be worked on because some [dorms] are better than others. They should take them one at a time and in the end it will attract more students,” said Anant Agarwal, a third-year CS major and a member of the Housing staff.

“It’s nice that they added the Clough Commons with all the new freshmen labs, but that really doesn’t help a fourth year like me,” said Biola Ogunfuyi, fourth-year BCHM major. “Tech is using the new labs to impress and draw in new students while putting all the old people in crappy buildings like Boggs.”

Though a hassle, the work that goes on is necessary.

“Construction on this campus will continue forever. You need construction,” Carson said. “Even though it can be frustrating getting to, and across campus, it comes with the territory for a leading university, bent on defining the technological research University of the [21st] Century.”

He said that students should voice their opinions to the development team by joining the Georgia Tech Student Foundation or the Georgia Tech Alumni Association (GTAA).  “Students can literally vote the designation of a portion of the funds raised through the GTAA, while the Student Foundation has the added experience of actually managing permanent endowment funds for the benefit of student organizations — not in theory, but in practice,” Carson said.

According to Carson, Tech students must serve their roles in the implementation of the Institute’s long term  plan by getting involved and influencing the future of campus.

While construction on campus has for the moment subsided, plans are underway to continue to improve the infrastructure.