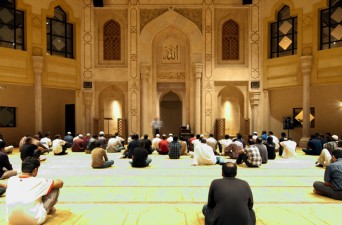 For an entire month, observant Muslims gave up food and alcohol, rejected temptation and meditated to cleanse the soul and mind in accordance with the traditions of Ramadan, the Islamic holy month.

Ramadan is the Islamic month of fasting in which devout Muslims learn about patience, spirituality, humility and submissiveness to God.

At Tech, this spiritual reflection is often interrupted by calculus lectures and physics labs.

Working alongside sleep deprivation is a common element of Tech life, but it is an entirely different challenge to study and take tests while fasting for about 30 or so days.

Life for a large percentage of Muslim students is difficult during the ninth month of the Islamic calendar.

Bader Kashlan, a fourth-year ENVE said, “During Ramadan I was also studying for the MCATs, so I would study after sundown till sunup then sleep all day until about two.”

Ramadan is a holiday based around lunar cycles. During this month Muslims do not eat, drink or smoke during the day and can only eat after sunset. The period of fasting stresses religious submission, sacrifice, and  cleansing the soul.

Bob Palmer, a fourth-year ME, said, “Once you get past the fasting it’s more important to focus on being a better person and on the things that are important in your life. Once that happens you forget about eating and drinking.”

However, on Tuesday, Aug. 30, Ramadan ended and Eid ul-Fitr began, marking the end of fasting with large feasts and various festivities.

The festivities include preparing and eating scrumptious feasts, exchange of gifts and dressing up in traditional outfits. It is the biggest celebration in Islam.

“On Eid I went to the mosque on 14th Street, said my holiday prayer, had coffee with a friend at McDonalds and then went to school,” Palmer said.

Eid means “festival,” and so people don their best clothing, give alms to the poor and visit relatives, all while holding large, open parties with the most elaborate of feasts.

“In the morning I went to a mosque for prayer, then usually I have a big breakfast with friends and then another large meal for dinner, it’s like a day-long feast. If I’m with my family then we have festivities at home,” said Kasim Ali, a fourth-year ME.

When asked about how he managed to juggle school, work and extra-curriculars, Adel Haque, a third-year BCHM, said, “Very carefully. Sometimes you have to just step it up, I won’t say we weren’t tired.”

Because fasting does not permit the drinking of water during the day, high temperatures made the fast much more challenging to observe.

However Ramadan  did begin earlier in the month so observers only had one week and a day of school to endure before Eid.

Balancing life and school can be difficult, especially at Tech, but the personal preservation of culture and tradition makes the Tech student population diverse and interesting.