This month, Atlanta received a blast of acoustic vibes with the arrival of Guster, an alternative rock band originating in Boston. Most notably known for their hit single “Satellite” in 2006, the band has taken a diverse and dynamic angle at music throughout their career. Band members include Ryan Miller (vocals and guitar), Adam Gardner (vocals and guitar), Luke Reynolds (vocals and guitar) and Brian Rosenworcel (percussion). Founding members Miller, Gardner and Rosenworcel started the group in the early 1990s. Guster is known for its instrumental variety, ranging from ukulele to bongos, strong harmonies and a grassroots fan base that praises their quirky on-stage humor. The Technique was able to talk with Adam Gardner about the completely acoustic show, based off last year’s tour and their new album Live Acoustic, featured at the Variety Playhouse this past Thursday and Friday, Jan. 11-12. 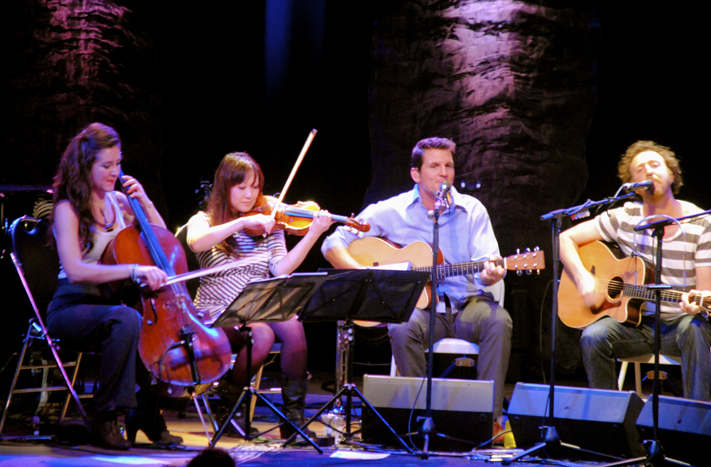 Your new album Live Acoustic was just released this Tuesday, January 8th. What was the inspiration behind it?

Last year we decided to do a tour looking at the band for the first time in 20 years in a new light. We traveled with comedian Jeff Garlin while performing an acoustic set. It turned out to be new and fresh for us; fans enjoyed it too. So many songs turned out great, there was no intention to put them on a CD, but looking back at the recordings from the tour we thought we had good material, and thought we could make a CD out of it. The acoustic format began at the first show at the Metropolitan Museum in NYC, and was not appropriate to do a rock show. We decided on a sit-down acoustic set. It was a special and different way of looking at our band, and now we are continuing that.

As a group playing an acoustic set together live, do you feel the process is more spontaneous?

It’s all about putting on a good show. The format sitting next to each other is a lot looser, more fun. We purposely build in the middle of the set an interaction with the audience, an open Q&A. It’s random and loose, way more intimate and interactive for us and the audience. With the acoustic set it allows us to hear each other and hear songs stand on their own, at their core.

Do you think the “Guster String Players” have contributed a unique depth to the arrangement?

Absolutely, huge, it allows for way more depth, way more emphasis on the songs. It’s really cool because they are women; we have never had women on tour. It’s funny as we are getting ready for the show they are putting on makeup. We love the female energy on tour.

You guys started playing together in college. Do you have any advice for aspiring musicians sitting in their dorm rooms right now?

Finish your degree! First of all get your degree, actually I’m joking. I think its important to make sure whatever you put out there is good and you are proud of it and that you are playing with people,.It’s about quality of music, not the industry. You don’t need that anymore with Internet and all outlets available online. When we started there wasn’t social media or email really.

What are some challenges that the group has faced as you have gotten older?

Now it’s a balancing act. We are all fathers, balancing parenthood with being in a rock band. It’s hard to tour the way we used to when we were in our 20s. We want to make sure we are still out there and that people still care about us; [it’s] a balancing act between how much touring we need to do for our fans and how much we can do.

As you previously mentioned, the style changes from Parachute to Easy Wonderful and now to Live Acoustic. What should fans expect from future new material?

We are working on new material now; it’s too early to say. I’m not sure what to expect myself. We just get together, and stuff we don’t like we throw away, stuff we like we keep. We are going to put out only improvements that are better than what we put out in the past.