Whether one loves him or hates him, Quentin Tarantino undeniably has style. Five minutes into his latest movie it is readily apparent that he is the director of Django Unchained. Released Christmas Day 2012, Django Unchained is a Tarantino Western film set in the pre-Civil War Southern United States. The titular Django (Jamie Foxx, Ray) begins the movie as a slave until a dentist-turned-bounty-hunter named Dr. King Schultz (Christoph Waltz, Inglourious Basterds) secures his freedom. This is in exchange for Django’s assistance in locating three brothers with bounties on their heads. Instead of parting ways afterwards, Dr. Schultz agrees to assist in freeing Django’s wife Broomhilda (Kerry Washington, Ray) from the plantation owner Calvin Candie (Leonardo DiCaprio, Inception). 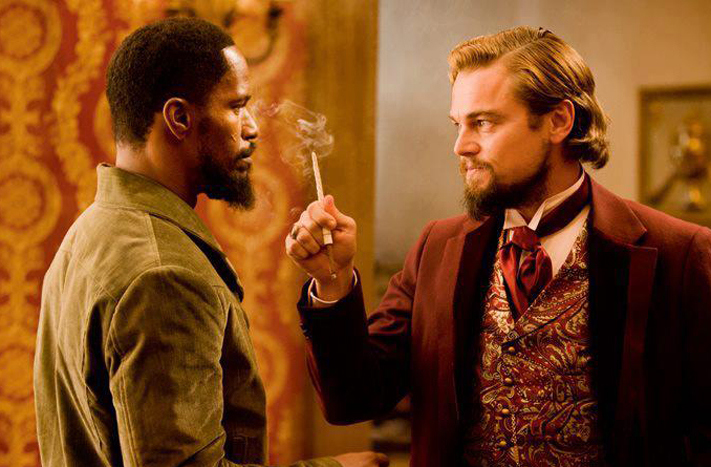 Like most Tarantino films, the screenplay, which he wrote, is fantastic and is certain to be nominated for major awards. It brims with the signature Tarantino wit and black humor. One scene in which a gang of KKK members argue about the holes in their hoods is disturbingly hilarious. At the same time, the screenplay does not seem to be as quick as some previous works like Pulp Fiction. Meaning the repartee, while it certainly exists, is not as prevalent. This is actually a benefit because Django is meant to be a new version of the old-style Western anti-hero, and it would have felt odd if he were as snappy with the dialogue as Dr. Schultz. Django is the laconic man of action while Dr. Schultz is the loquacious man who talks them out of problematic  situations. Tarantino also directly lays bare that he is concocting a legend by addressing that Broomhilda, Django’s wife, shares her name with a princess in a popular German tale who is guarded by a dragon and saved by the hero Siegfried. Broomhilda’s name and her ability to speak German, instead of being innocuous symbols, become integral to the scheme when the protagonists attempt to rescue her.

The second aspect of the film which stands out is the acting. There is not a weak actor in the ensemble, but Christoph Waltz and Leonardo DiCaprio simply nail it. Waltz deftly handles the myriad aspects of his character: mentor, foreigner, freedom fighter and ruthless killer. None of these characteristics feel out of place in the same person. DiCaprio as the owner of Candyland, a plantation, is equally impressive as he manages to convey that Calvin Candie is vain, casually heartless and calculating in a single shot. But it is the climax when DiCaprio shines by simultaneously losing his cool and remaining in control of the situation. Also notable is Candie’s head slave, Stephen (Samuel L. Jackson, Pulp Fiction). While Jackson plays an old version of his usual foul-mouthed stubborn character, there is something sinister behind the elderly Stephen that suggests he has more control over his owner than the latter realizes.

The only notable issue with Django Unchained is its length. Clocking in at two hours and forty-five minutes, the film has a tendency to linger in scenes. This is common in Tarantino films, but more plot keeps happening. A gunfight which seems to be the climactic finale is actually just another milestone. There is still thirty to forty minutes left, and it feels like one dragged out denouement. It is clear that Tarantino is using the time to transform Django from a folktale into a true legend, but it feels as though the movie is plodding to its conclusion. But of course there is plenty of action throughout to entertain. And since it is a Tarantino film, there is plenty of fine red mist hovering on-screen.

That said, Django Unchained is well worth the time, especially for fans of Westerns and Quentin Tarantino films. An amazing ensemble that delivers a great screenplay coupled with well filmed choreography and gunfights add up to make Django Unchained one of the best movies of the year.