Disney’s Beauty and the Beast is fondly remembered by children of the nineties as a fairy tale with funny talking clocks and terrifying monsters, both anthropomorphic and human. It was adapted for the stage and enjoyed a successful Broadway run from opening night to 2007. It is currently Broadway’s eighth-longest running production in history. The Fox Theatre is now, for a short time, acting as the enchanted castle containing a wilting rose, a beast and a woman who might be his last hope and one true love. 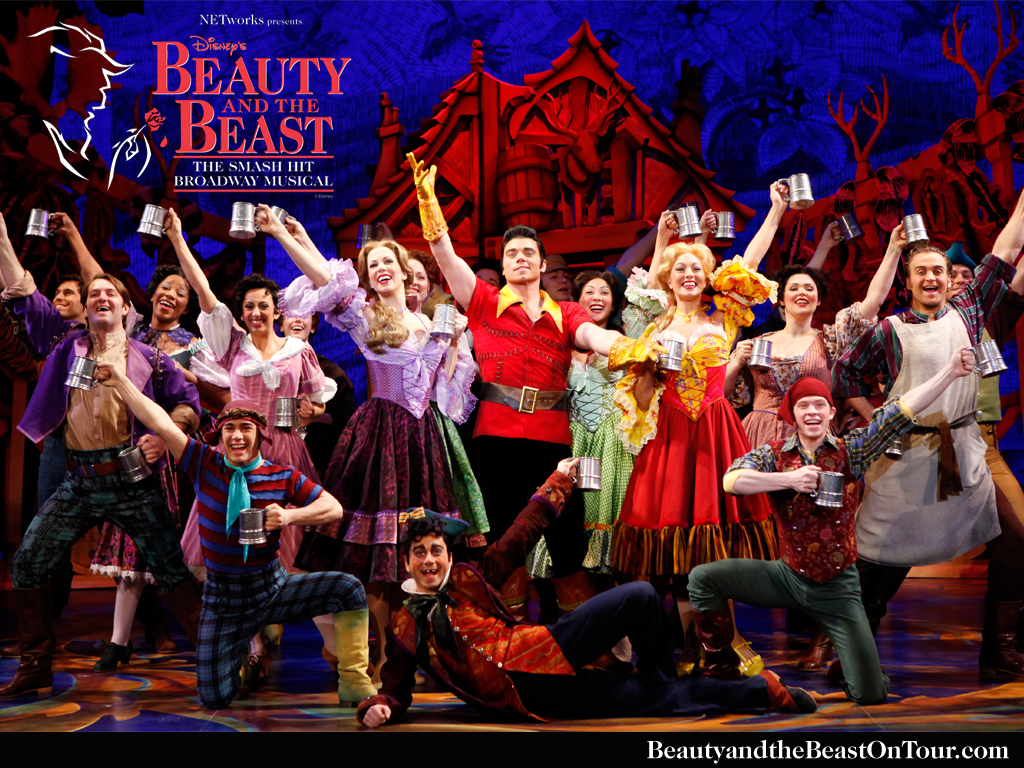 The play is almost a direct plot adaptation of the Disney movie. A young woman, Belle, is bored of living in a small provincial town and dreams of adventure. Belle’s father, an inventor, goes missing in the woods on the way to a fair and she searches for him. She finds him as a prisoner in the enchanted castle of a prince who was transformed into a beast by a witch’s curse. This curse will only be lifted when he finds love. Belle offers herself to be a prisoner in her father’s place; a request Beast obliges. The remainder of the play is a romance of the beauty and the beast falling in love with the assistance of Beast’s servants, who were transformed into household objects by the same curse which spawned Beast.

The play relies on three characters: Belle (Hilary Maiberger), Beast (Darick Pead), and Gaston (Matt Farcher). Belle is played spectacularly as the real life version of the girl loved by anyone who saw the Disney movie. Her imagination and longing for adventure are somehow wider than the French countryside. Although she has little experience from her small town, she has incredible strength and fortitude. Not everyone can stare down a lumbering Beast and consistently conquer him in a battle of wills. Gaston is written to be a chauvinistic and narcissistic brute of a man, yet he manages to be one of the most enjoyable characters to watch because it is impossible to take him seriously. He struts and strides across the stage and his usual poses show off as much muscle as possible. A caricature, but one lively acted.

Unfortunately, Beast does not retain the subtlety required by the story. The fallen prince is meant to be a selfish, angry animal who gradually becomes more human due to Belle’s influence. But there is no animal. The towering Beast is barely taller than Belle and he ceases to be frightening after Belle trades places with her father in the first twenty minutes. His tirades of anger are not the roars and growls of a monster but are more akin to a teenage girl’s tantrums. As Belle cleans Beast’s wounds after saving her from a wolf attack, Beast whimpers like a puppy instead of bellowing in pain. Belle is supposed to tame a Beast to find the man inside, but it feels more like she is disciplining a whiny dog.

The secondary cast performs admirably. Lumiere (Hassan Nazari-Robati) is appropriately lascivious even if his French accent is lacking. Mrs. Potts (Erin Edelle) is caring, Cogsworth (James May) is wound up and Lefou (Jimmy Larkin), Gaston’s henchman, is slapstick comedy relief that errs on the side of annoying for any audience member older than ten. Lefou’s acrobatics during the physical comedy gags, however, are exceedingly impressive. Some characters are given more face time and are even christened, such as Lumiere’s duster lover Babette (Jessica Lorion), and the dresser Madame de la Grande Bouche (Shani Hadjian) who is given a new backstory as an opera singer.

The production mainly provides the magic. The costumes are fantastic, and it is worth admission price just to see the elaborate designs in motion. When possible, the costumes are precisely the same as those in the Disney film and it is a treat to witness Gaston’s red outfit, Belle’s blue and white maiden ensemble, and Beast’s shredded shirts. The object characters are all cleverly costumed so that Mrs. Potts actually has a handle for an arm, Cogsworth sprouts a clock key, and Lumiere even gets ‘flames’ on his hands. There was a collective gasp from the audience as Belle stepped onstage in her golden ballroom dress. The sets and lights create perfect ambiance in every scene. Ornate stairwells are carted on and off stage by gargoyles, giant doors grant entry to the castle, and there is a large round moon to serenade.

The mystical artistry of the costumes and sets are epitomized by the opening scene. This scene is told in stained glass windows in the film and is blatant exposition detailing the Prince’s transformation. The stage scene is like seeing a fairy tale enacted before one’s eyes as a narration rumbles around the silent and purposefully overacted characters. The old woman begs for hospitality from the selfish prince. A blink of the theatre lights and suddenly a glowing witch towers over a beast brought to his knees. It is a breathtaking introduction to the play and its theme, expounded on in this script, of transformation.

All the musical numbers from the film return for the stage plus a few extra composed by Alan Menken, who also created the original film songs, with lyrics by Howard Ashman and Tim Rice. While the songs from the film tend to be the better ones, some of those composed for the stage hold their own. “If I Can’t Love Her”, sung beautifully by Beast, was a significantly superior song to end the first act with than “Be Our Guest,” which immediately preceded it, because it gave a character moment precedence over glitz and glamour. There was no weak voice amongst the cast, and Belle and Beast performed all their songs magnificently.

Although it has a rushed climax and some of the dances in the songs went too long, the play hits all of the right notes and is a must-see for fans of the Disney film or musicals in general. The ballroom may not be as gorgeous as it is in the film, but Mrs. Potts voice echoing warmly around Belle and Beast as they dance with their eyes locked on each other still makes you believe in that four letter word as old as rhyme.