Whether or not one agrees or disagrees with his politics, it cannot be denied that Abraham Lincoln was one of the most influential and revolutionary presidents that have ever led this country. The repercussions of his actions during the final months of the Civil War can be seen clearly within American society to this day, especially in relation to his liberation of African American slaves. And no film paints a better picture of these last few months than Steven Spielberg’s Lincoln, released on Nov. 16. Exploring the titular president’s central role in both the liberation of slaves and the ending of the Civil War, Lincoln is a captivating look at American society during the time of one of our greatest political upheavals. 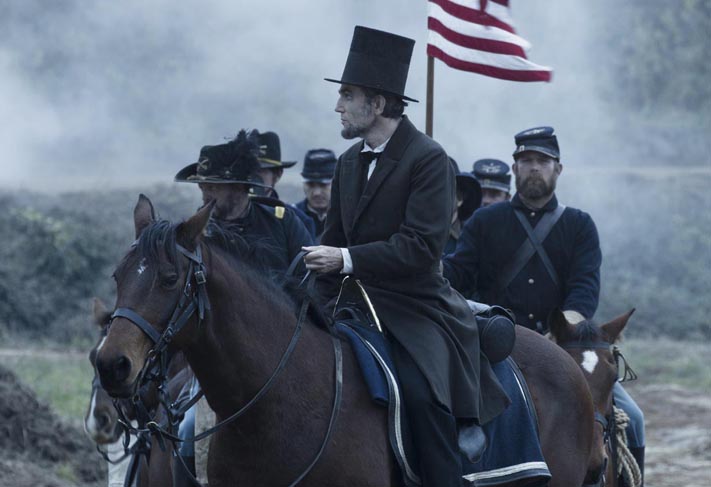 The film revolves around the last few months of Lincoln’s (Daniel Day-Lewis, There Will Be Blood) life, after he has just been reelected for a second term in the Presidency and is faced with the seemingly impossible task of reuniting the United States of America, while at the same time outlawing the practice of slavery. At his side are his wife (Sally Field, Forrest Gump), his son (Joseph Gordon-Levitt, The Dark Knight Rises) and his Secretary of State (David Strathairn, The Bourne Ultimatum), each of whom play a significant role in influencing the actions of Lincoln himself. With the war drawing to a close, Lincoln must find a way to pass the Thirteenth Amendment, which would outlaw slavery, before the southern states can be inducted back into the Union and vote against it. In order to do this, Lincoln must pass the amendment through the gauntlet of the House of Representatives, one member of which is abolitionist Congressional Leader Thaddeus Stevens (Tommy Lee Jones, No Country for Old Men), whose relationship with Lincoln is friendly yet less than trustful. As the debate over whether or not to pass the amendment comes to a head, Lincoln may have to choose between a united America or the freedom of an entire race of people.

The accuracy this film boasts in portraying 19th century American society is certainly commendable to the extreme, as are the performances of all of the supporting actors, but in all reality it is Day-Lewis’s powerhouse portrayal of Lincoln that makes this film worthy of critical acclaim. This version of Lincoln is more soft-spoken than most viewers might expect, creating a more realistic and humanized look at the famous president. But the softness of his voice in no way inhibits the power of his message. From the longest political speech to the smallest bodily movement and mannerism, Day-Lewis embodies the character of Lincoln, giving a performance which is truly difficult to look away from. With such a portrayal, it is no wonder that critics are already favoring him to win the next Academy Award for Best Actor.

Overall, Lincoln is a fascinating and mature spectacle that successfully taps into the emotions and drama of a period of crisis in American history. Of course, certain liberties are taken to make the transition from historical event to cinematic blockbuster, and some of these liberties may not bode so well with the more strict audience members, but on the whole this film gives an accurate portrayal of the attitudes and atmosphere of the time period. To top it all off, Spielberg adds a taste of courtroom drama to the mix, and within this setting the characters truly come alive, interacting with each other in the most dramatic ways. On the whole, Lincoln succeeds in providing a close, intricate look at its titular character while maintaining a dramatic account of the bigger picture of the Civil War and the indecency of human slavery.