Any classic video gamers who still remember the good days of arcade tokens and joysticks may want to prepare themselves for a nostalgic moment or two.  Disney’s newest animated film Wreck-It Ralph hit theaters on Nov. 2. Boasting an all-star cast of video game characters like  never before seen (and some that have never been seen at all), this film promises to load up on ammo, step on the turbo and blast beyond viewer expectations. 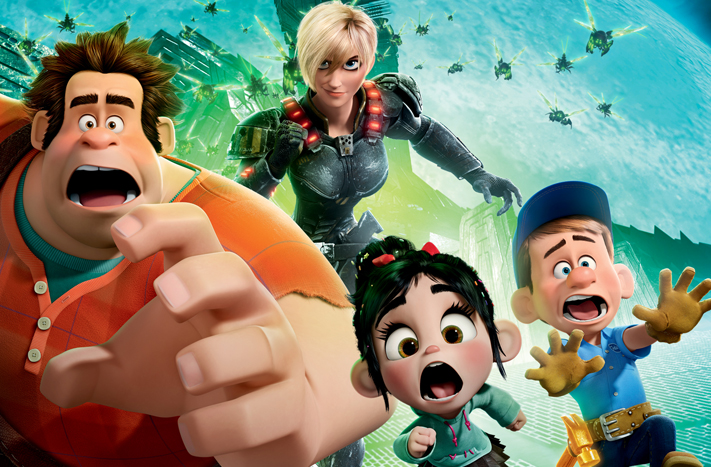 The story takes place in a  small arcade that is home to several classic, quarter-eating video games. However, in the spirit of Toy Story, the characters in these video games come to life every night when no one is watching. With the ability to travel between games using a subway-like extension cord system, the characters eat, drink, talk, and socialize with each other. One such character named Ralph (voiced by John C. Reilly, Step Brothers), despite being reasonably well-mannered and friendly, has the job of being the bad guy for the game Fix-It Felix Jr. For 30 years, the giant, gorilla-shaped Ralph has been shunned by his “co-workers” and generally feared by everyone due to his villainous status. All he really wants is to be accepted and taste some of the love and admiration that is shown in the game to Felix (Jack McBrayer, 30 Rock), the popular and ever-optimistic hero. In a desperate bid to change how people think of him, Ralph abandons his own game and ventures out into the world of the arcade in search of a way to prove his heroism. Throughout his journey, Ralph crosses paths with the battle-hardened, professionally animated heroin of an alien shoot-‘em-up game (Jane Lynch, Glee) and the cute but annoying glitch character of a go-kart racing game (Sarah Silverman, School of Rock), both of whom give Ralph a completely new outlook on life. Travelling from one game to the next while making both friends and enemies along the way, Ralph discovers that his true destiny may not be  what he intended.

In terms of story and emotional connection with the audience, Wreck-It Ralph is not an instant Disney classic, but its characters are memorable and the quality of animation is spot-on. The film is about video games and nothing else, so many classic video game tropes are included in a manner that should bring at least a few fond memories to anyone born in the arcade generation. For instance, one of the long-running jokes throughout the film is the cameos by classic video game characters in situations that are slightly different than what most audience members will remember. Sonic the Hedgehog gives safety advice to travelers as they journey between games, Q*bert and Coily are homeless on the streets, and Clyde the Ghost from Pac-Man runs a group therapy session for arcade villains. Even a certain moustached plumber gets a shout-out once or twice. Ultimately, it is these little “special moments” that make Wreck-It Ralph not just another animated film, but rather a salute to an era that was and is an enormous part of countless childhoods.

If there is anything bad to say about Ralph, it is that the story may come off as a little too under-ambitious at points. But this fact could be either a pro or a con based on the viewer. Younger audience members will certainly enjoy the wacky characters and truly vibrant animation, but older viewers may feel that the film does not reach its potential in terms of both laughs and storylines. The idea of a plot taking place in the coded and pixelated world of a video game, where mushrooms grant the power to shoot fists of fire and regeneration is an everyday occurrence, is an interesting one and always worthy of exploration. However, it will be up to the audience to decide if Wreck-It Ralph takes advantage of this idea and offers a fresh and interesting story, or if the film decides to go easy and play it safe in the arcade room.