It is 19th century China, and all hell is about to break loose in Jungle Village. This village is home to seven warring clans, with the largest of these being the Lion clan, which has just undergone a coup. Having killed Gold Lion (Chen Kuan-tai, Executioners from Shaolin), the clan’s second-in-command, Silver Lion (Byron Mann, Street Fighter), breaks the standoff by systematically wiping out the opposition. Zen-Yi (Rick Yune, The Fast and the Furious), Gold Lion’s son, sets off on a journey to return home and avenge his father’s death. In the midst of all these events, a mysterious British soldier by the name of Jack Knife (Russell Crowe, Gladiator) begins his stay under the care of Madam Blossom (Lucy Liu, Chicago) at the local brothel, while the Lions plan to ambush an incoming shipment of government gold. 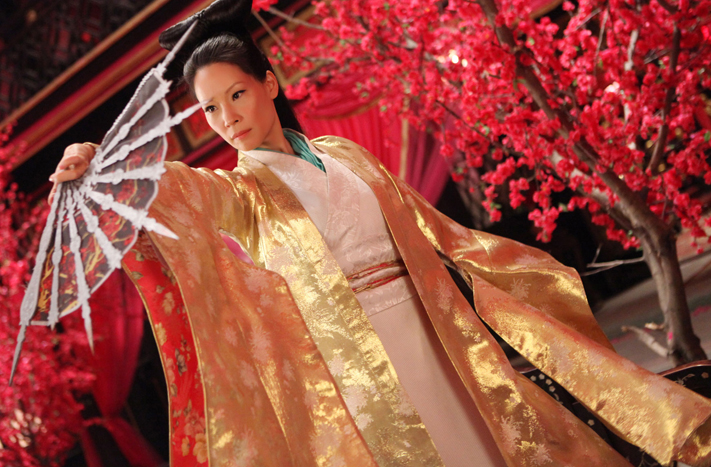 So where does the man with the iron fists come in? The village blacksmith, Thaddeus (RZA, Wu-Tang Clan), is the story’s narrator and main character who eventually comes to wield a pair of – you guessed it – iron fists. Desperate to buy the freedom of his lover, Lady Silk (Jamie Chung, Sucker Punch), the blacksmith continues to forge the clan’s weapons in spite of his accruing guilt.

Despite a lackluster plot, the film’s characters purposely fall into archetypal roles to make for a better comparison. This is most effectively demonstrated by the unique tone of each fight scene. Relationship dynamics are shown instead of explained, made possible by having fighting styles reflect dominant personality traits. Poison Dagger (Daniel Wu, City of Glass) is a puppeteer who manipulates everyone from the shadows, using poison darts to end fights before they even begin. Madame Blossom is the village’s matriarch, wielding a Steel Fan befitting her elegance and hidden strength. Although characters lack on-screen development, everyone has something to hide and the audience is presented with enough of their pasts to hunger for more. Crowe’s and Liu’s performances stand out, especially their on-screen chemistry.

The styling of the film is a blending of worlds, an east-meets-west rendition reminiscent of Samurai Champloo, where hip-hop undertones were given to a feudal Japan. In The Man with the Iron Fists, the soundtrack is its soul, featuring a number of tracks made specifically for the film by the likes of RZA, Kanye West and Wiz Khalifa. Each character is accompanied by their own identifiable brand of music. Jack Knife’s theme stands out the most in the form of a jaw harp that rhythmically cuts into the air.

Granted, the premise is not very original, but it is not supposed to be. The Man with the Iron Fists in its entirety is a nod to the classic martial arts films of the 1970s. Characters are given intricate back stories that are never shown on screen except in the way that they fight and the causes they fight for. Take for example Brass Body (David Bautista, WWE), one of the film’s most memorable characters with the ability to turn his body to metal, the origin of which is never explained. Director RZA comes to give a beating, and he makes no effort to mask his intentions.

Viewers shouldn’t expect the film to receive an Academy Award, but they should expect a lot of wire work, mind-blowing fight scenes, cool special effects and a huge lack of plausibility.