Thursday of Homecoming week promised to be a night full of original and entertaining shows from small, local bands to big names like 3OH!3. The Student Centers Program Council (SCPC) held a Battle of the Bands event earlier in the month to decide who among the Tech community would open for 3OH!3 during the concert, and the victorious acts were Choicebeats, The Tides and Champagne Room. 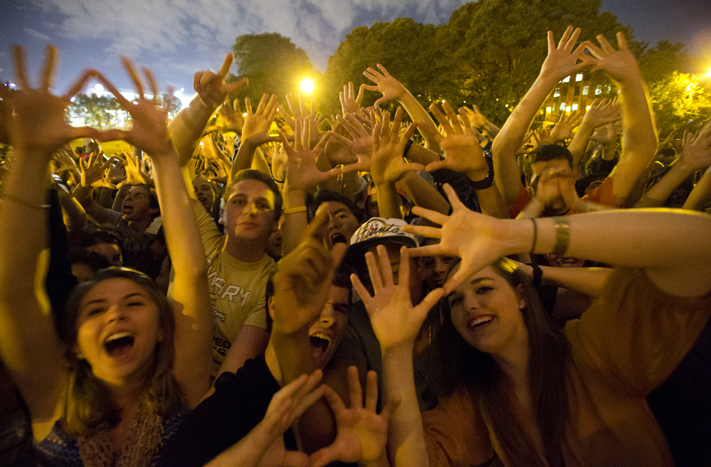 The night of the concert, students began to show up to the Burger Bowl on West Campus to support their fellow musicians. As a crowd started to formulate, Choicebeats (Lalit Devraj), South India’s “best beatboxer,” began the night by entertaining the crowd with his ridiculous beats and shining charisma. Afterwards, The Tides played a few upbeat original songs as well as a cover song, which the crowd pleasingly sang along to. Their natural transitions from song to song were respectable, and the crowd could see they were genuinely having a great time putting on a show for the student body. The final opening act was the Swing Punk band Champagne Room. Throughout their act, the crowd was mesmerized by their stage energy. One of their last songs, “Booty City,” seemed to captivate the whole arena.

Finally, the headliner 3OH!3 took the stage and wowed the crowd immediately. As a backstory for the band, the duo  received much success in 2008 due to their single “Don’t Trust Me” from their second album Want. Within a year, their third album, Streets of Gold, which included “My First Kiss” featuring Ke$ha, bumped 3OH!3 to an even higher, more renowned status. They have been quite anonymous recently due to the time spent on their new album, Omens, in addition to touring numerous college campuses around the country to promote this album, which will be released on December 4.

At the Homecoming concert,  3OH!3 members Sean Foreman and Nathaniel Motte did not fail to motivate the crowd in every aspect.

The duo had quirky transitions from song to song, with fun and different story lines to go along with every interlude. As far as special moments go, the most memorable of this concert was perhaps when Sean convinced the crowd to chant in sync. With the band’s energetic rock and electric mix, the crowd was more pumped up than at any other moment in the entire night.

As the bright lights vacillated between the beats, the crowd jumped up and down in sync. 3OH!3 consistently succeeded in interacting with students in the crowd as well.

At one point during the show, Sean took a video with one of the audience’s iPhone, which seemed to make her night. The band’s stage presence was definitely that of professionals. It seemed that 3OH!3’s main concern during the concert was to please their audience, and they definitely achieved that goal.

Overall, the Georgia Tech Homecoming Committee definitely succeeded in making the concert successful. The wait time between bands was fairly short and each band contributed its own vibe to the whole concert. In short, homecoming entertainment did not fail to satisfy the needs of the students who desired a fun evening on campus.