Driving down the connector the past few weeks, commuters are sure to have noticed the brightly striped yellow and blue tents being erected near Atlantic Station for a season now familiar to Atlantans. It’s not Halloween or Thanksgiving, but the almost yearly return of Cirque du Soleil. Their latest offering for Atlanta, TOTEM, opens this evening (Oct. 26) for a limited time. 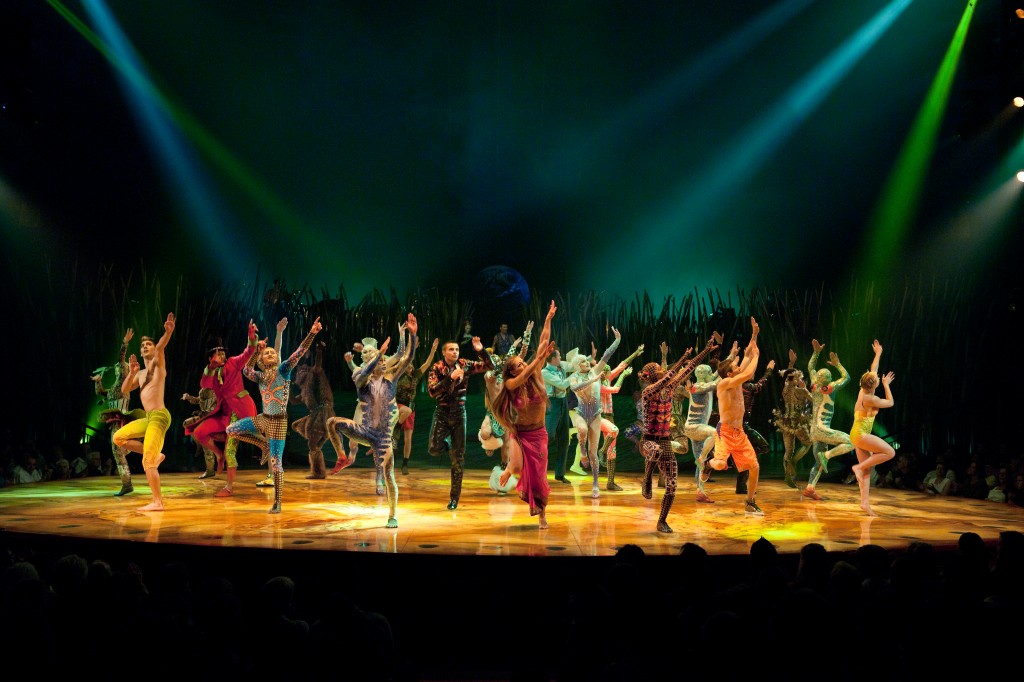 [/media-credit]TOTEM is the thirteenth Cirque production to come to Atlanta since their first visit with the Nouvelle Experience in 1991. Since then, a myriad of acrobats and performers have graced the Big Top.  This year’s TOTEM is sure to thrill and entertain in a consistent style for all ages.

The concept of TOTEM was inspired by creation myths and stories from around the world, and like a totem pole, it follows man’s ascent from the ground to the ultimate ambition of flight. The 52 artists will perform on a turtle-like stage over the course of 11 acts, which will vary by the night.

The acts will push the boundaries of the human body with high-flying stunts like the carapace and trapeze, as well as modern takes on classic circus features like roller skates and unicycles. The acrobatics and music alone are sure to dazzle, but more interesting is the story and thought put into the production as a whole. The Technique had the opportunity to talk with some of the cast and creators: Artistic Director Tim Smith, Band Leader Charles Dennard and artist and “frog” Umihiko Miya.

The average Cirque de Soleil show is in production for at least a year before rehearsals begin, as each production is, “completely brand-new and unique,” according to Smith. The whole cast, acrobats and musicians, are found through a process that can take up to two years.

Each performer is irreplaceable, with no back-ups or understudies. Miya says they encourage each other “to do better, to do more” through tough training, practicing and traveling they undergo together. Miya is featured as a frog in the opening carapace acts, as everyone leaps and bounds, “celebrating life.”

The show also features six musicians and two singers, led by Dennard playing piano and accordion. The style of the music will set the tone for each act and ranges from Bollywood to flamenco – all live.

There is also a heavy Native American influence, with one of the singers hailing from Quebec and singing in his native tribal tongue. TOTEM is not just an exploration of man’s evolution, but also a “journey through many different lands” and the “infinite potential of human beings,” according to Smith.

Much of the show is  conceptual and features characters like a scientist and an American Indian dancer who lead the audience “through man’s progress forward and upward.” However, the show is purposefully secular—“not a religious thing”—and the cast instead hopes to encourage the audience to use their imaginations.

Laughingly, Smith and Dennard agree that “[s]ince it’s not spelled out to the audience…it would be impressive if you got that out of it,” specifically regarding the frog’s joy and ambitions to reach for the sky and release from the earth in the first act.

TOTEM is sure to enthrall and inspire audiences, and it has already compiled a list of cities across the globe it will visit during its tour. Coming to Atlanta on its fourteenth stop, those interested should catch it before the tents are gone after the last general show on Dec. 23.

Tickets range from about $50 to $150 but should be well worth the price. Attendees will be impressed by the sheer spectacular nature of the show whether or not they know the thought and origin of TOTEM as it follows man’s ascension to his potential.