Menopause the Musical is an uproariously good time, especially for those in on the joke. The cast of four breathed so much life and nuance into what could have been just schtick. They frequently transcended the comedy from their “situation” and the laughs can be enjoyable for those who are not female and/or of a certain age. More words were sung, in Yankovic-esque menopause parody to the tune of the hits of the 50’s and 60’s, than spoken over the course of the show making the entire show easily digestible and energetic. 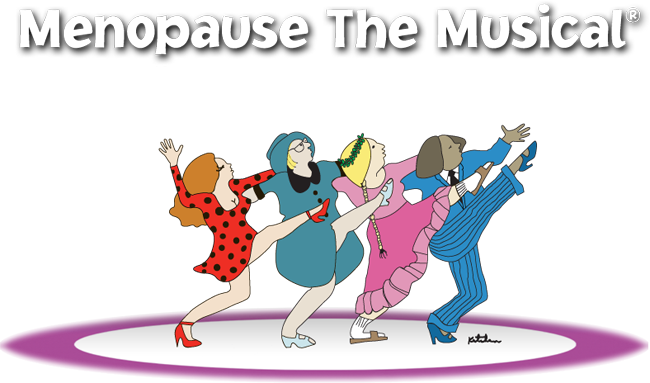 Menopause the Musical is about four women going through “The Change.” This alone can deter some of the potential audience, and rightly so. The show is exactly what it seems without trying to appeal to a general, non-menopausal audience. This is definitely a win because this focus pays off for those who know what it’s all about. The target audience of middle-aged women (and those who love them) will appreciate the no-frills, nonstop stream of jokes that hit close to home. In fact, most of the jokes seemed to land on everyone’s rooftops, judging by the chorus of “OHHHHH  GOD”s uttered by the audience throughout the show.

What really drives the show are the jokes and situations of the four-member cast, not a complex story and fictional characters. The show is basically a series of vignettes with no story with which to keep track. The story, if you can call it that, is four ladies from different walks of life who meet in a department store and talk about menopause. From there, they express, mostly through the hits of the their generation, the changes they are experiencing. They cover a gamut of topics, including hot flashes and mood swings, and discover they are not alone in their bodily changes, a sentiment the target audience should be mirroring.

Using the tunes of the popular hits from the youth of the current crop of menopausal women with words about menopause brought down the house. The music was definitely the highlight and most important aspect of the show. There were twenty-four songs parodied throughout the hour-and-a-half running time, which is about one song every four minutes, an incredible density. Fortunately, every song was well-conceived and -written, breathing continued life into the show. Aretha Franklin, The Beach Boys, Smokey Robinson and Sonny and Cher were all sacrificed at the altar in the name of comedy and menopause. The current generation may not know all the songs used through the show, but knowing the originals is bonus points, not required for enjoyment.

The physical comedy of the cast elevated the show to a new level. While the written script is great, the execution by the cast brought more to the show than the script offers by itself. Hot flashes, mood swings and shrinking bladders were all embodied to perfection through dramatic faces and hilarious body movements. These skills are what make the show appeal to a wider audience. While not everyone can understand the struggles of a woman undergoing “The Change,” the frustration and anxiety comes through through the delivery of the lines and the movements of the actresses.

While Menopause the Musical may not seem like it would appeal to a wide audience, it is much more enjoyable to a general audience than it would seem. Some sections of the show can be a little uncomfortable (Tina Turner’s “What’s Love Got to Do With It” has a new meaning), but most of the show is hilarious and entertaining. The menopausal audience (and those that live with them) definitely enjoyed the show much more than this college-aged male, as they could relate to the goings-on. It’s hard to recommend a college student to go this musical, but it would definitely be a great birthday present or Mother’s Day outing for those who’d understand.