In the year 2074, time travel has been invented and immediately outlawed. It is then used by criminal syndicates to bypass tracking technology when disposing of bodies. Targets are sent back in time to be killed by “loopers”—hired guns who are paid in silver, stashed on the backs of their victims. In order to end a looper’s contract, a version of his older self is sent back in time with a final pay day; this process is known as “closing the loop.” The year is 2044 and Joseph “Joe” Simmons (Joseph Gordon-Levitt, Inception) has failed to close his loop. 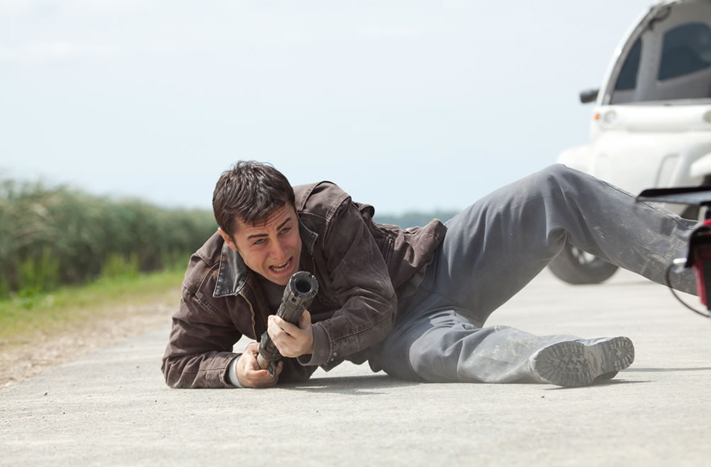 [/media-credit]When Joe’s older self (Bruce Willis, The Sixth Sense) is sent back unmasked, Joe hesitates just long enough to allow his older self to escape. During a later encounter, Joe’s older self explains that someone calling himself the Rainmaker has taken over all of the syndicates in the future and is closing all the loops. Future Joe plans to kill the Rainmaker as a child in order to save his wife, whose death the Rainmaker caused. In an attempt to get back in with his boss, however, the younger Joe races to catch his old self and turn him in.

At its core, Looper is a well-paced action film that boasts an impressive cast and an intriguing story. Willis carries an undeniable stage presence as Joe’s older self. Dominating scenes with a remarkable conviction and soft spoken demeanor, his character knows what has to be done and is not afraid to do it. When confronted by multiple assailants, he mows them down with a brutal efficiency that can only be expected of a hardened killer. However, he is far from perfect, and his selfishness and lack of remorse serve to highlight the weaknesses that his younger self must overcome.

Levitt holds his own as the more naïve Joe of the present. He is a drug addict and a loner, and after spending years struggling to get by, he is content with closing his loop and retiring. His emotional ties are few and far between, but through them he tries to desperately cling to what is left of his humanity.

Early in the film, Joe is presented with a choice: give up his best friend Seth, or have half of his retirement savings confiscated. Shortly after selling out his friend, Joe is shown regretting his decision—not because he cared for Seth, but because the decision was so easy to make.

The audience is shown two sides of the same picture: a younger Joe hoping to avoid the mistakes of his older self, but also an older Joe pitying his younger self, eager for him to move on and marry the woman he claims will save him. When Willis’ character first explains his plan to save his wife, Levitt’s is quick to retort. If he is so desperate to save his wife, why not kill himself in the past so they never meet? Quickly dismissing the idea, it is apparent that Joe has never cared for anyone or anything more than he has cared for himself. By using two people to portray different aspects of the same person, Joe is made to be a heartbreakingly complex, but human, character.

Although confusing to explain, Looper’s premise gradually becomes easy to follow. The concept of time travel is merely used to present the question: “What would you do if you came face-to-face with your future self?”