The weekend of Sept. 28 was a treat for several fans of electronic music in and around the Atlanta area. CounterPoint, the first music festival of its kind, took place in Fairburn, GA, 30 miles southwest of Tech’s campus. Featuring pioneer artists from the electronic/dance music field such as Avicii, Alesso, Skrillex, Bassnectar, Pretty Lights, Steve Angello and many more, the festival attracted tens of thousands of fans from all over the southeast. 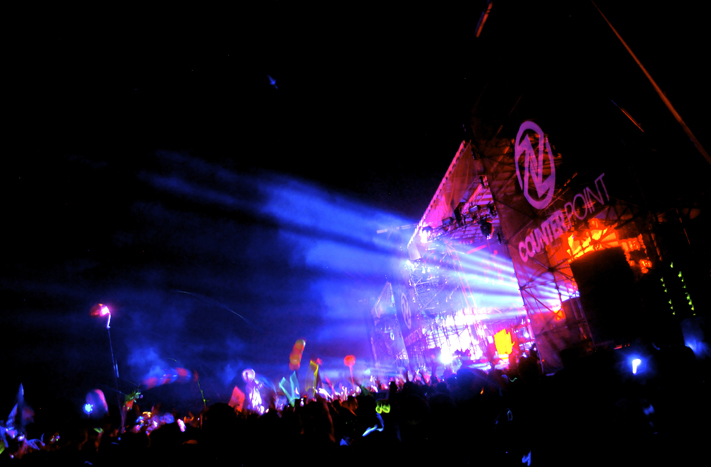 For a first-timer, CounterPoint  did not fail to impress. The festival had two main stages (the CounterPoint and Point stages) as well as two smaller tents for performances. Several food and drink stalls were also spread over the massive plot of land.

Another interesting aspect of the festival was the concept of “Silent Disco,” which involved each member of the audience wearing a pair of personal headphones to listen to the music being played by the DJ on stage. This music was not audible to those outside of the area.

The camping grounds at CounterPoint were excellent. With campsites on the east and west sides of the grounds, thousands of fans camped the three days in the midst of wonderful music and entertainment. This was complemented by relatively favorable weather, save for a thunderstorm on the second day of the festival.

Fans at the festival were especially impressed with the quality of the performances, the food options and the fact that almost all shows started and ended according to schedule, even after the brief spell of bad weather. But most of all, the majority of fans were impressed by the formidable line-up, featuring some of the biggest names in the field. With its high level of success and artist participation in the first year, CounterPoint has great future potential.

In particular, the shows by Skrillex and Pretty Lights made the festival most memorable. Skrillex had a screen behind him showing videos and song lyrics, followed by an awesome display of fireworks to finish the performance. Pretty Lights followed Skrillex with a famous light show that featured lasers and spotlights that illuminated the festival grounds. Another interesting feature was the small pond in front of the Point stage. Fans readily took this opportunity to cool off during the day.

While an overall success, a major drawback to the event was the time clashes between big artists. Fans were sometimes disappointed because two of their favorite acts were performing simultaneously  in different tents. For example, Excision’s performance clashed with that of Avicii on Friday, and performances by Porter Robinson and Pretty Lights clashed on Saturday.

Aside from this, the crowd was still amazing. A mass of spectators of all ages, races and nationalities could be witnessed at this festival, creating an audience that could easily be categorized as one of the most entertaining at any music festival.

CounterPoint sold 30,000 tickets, a formidable turnout for the debut of a music festival. The festival was a success not only because of the artists that participated, but also because it catered so well to music lovers. Moreover, CounterPoint was a success because the festival grounds complemented the experience. Spanning over 300 acres of hills and lakes, the venue was beautiful, serene and could easily cater to so many people.

All in all, CounterPoint Music Festival 2012 was a giant success. From the points of view of artists, organizers and fans, the festival exceeded all expectations. Furthermore, the turnout and line-up were phenomenal. All facilities were full during each performance, no matter the time of the day or night it was scheduled.

Anyone who missed this year should not make the mistake again. As anyone who went this year knows, next year’s CounterPoint will have a lot to live up to, but it will definitely be worth the experience.