Last Friday in Piedmont Park started out like any other: athletes going for a run, dogs steering their owners around the trails, and a few games of Frisbee. By 4:30 p.m., though, Music Midtown was in full swing. 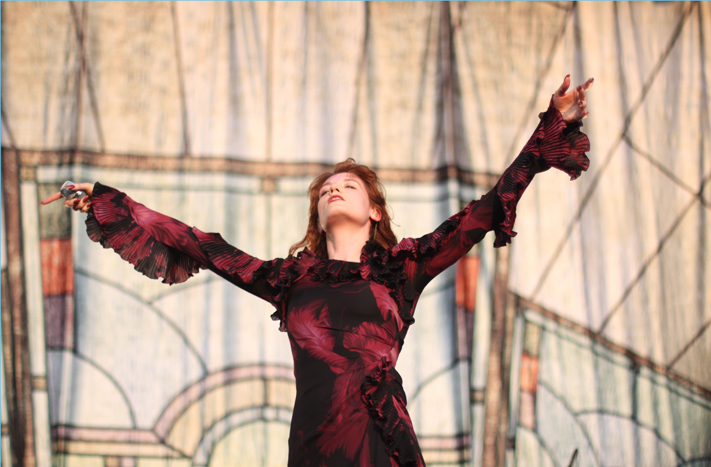 After a six-year hiatus, with the exception of a one-day appearance in 2011, the outdoor festival returned last weekend. It filled the sloping grass hills with tens of thousands of fans to catch performances such as Van Hunt, Joan Jett & The Blackhearts, T.I., The Avett Brothers and Foo Fighters.

Clear skies and a calm breeze welcomed the crowd for a night of diverse artists.  Van Hunt, Joan Jett & The Blackhearts and T.I.—the latter of which was critical in livening up the hometown fanatics with the familiar melodies of “Live Your Life” and “Whatever You Like”—each played for about an hour before The Avett Brothers took the stage at sunset.

The North Carolina-based indie-rockers were well-received, playing many songs from their latest album, The Carpenter. Their most popular sing-a-longs included two tracks, “January Wedding and “Head Full of Doubt/Road Full of Promise,” from their 2009 album, I and Love and You.

Their performance was followed by the undoubted highlight two-hour performance by the Foo Fighters, led by former Nirvana drummer Dave Grohl. The majority of the 120 minute set was packed with hit after hit from the nearly two-decades-experienced alternative rock band. After asking the revelers how many had not seen the band live before, Grohl jokingly contended, “We’ve only been a band for eighteen [expletive] years!”

After playing some of the group’s most well-known tunes, including “All My Life”, “The Pretender”, “Walk”, “These Days” and an especially well-embraced rendition of “Best of You,” Joan Jett reappeared for a collaboration of “Bad Reputation.” The night closed with a powerful, goose-bump-inducing presentation of “Everlong”, providing the mass of 30,000 or so with the most popular sing-a-long of the evening.

Saturday included another ten hours of shows by ten artists or groups. The venue announced that the 50,000 person capacity had been sold out early in the performances. Opening the blistering afternoon line-up was Atlanta-based rock band O’Brother, followed by rather brief performances by Civil Twilight, LP, Garbage and Adam Ant. Although some of the early acts were not  well received (there seemed to be the same number of fans in the food lines as there were surrounding the stage), the concert was going strong by the time Ludacris took control.

In a somewhat haughty and repetitive manner, Ludacris had no issue reminding the crowd that he had enough Billboard-topping hits to fill more than his sixty-minute-set, but his lively and comic band provided one of the most memorable blocks of the festival. Ludacris seemed to be enjoying himself as much as the fans, saying, “It feels good to be on a stage with all different types of music, playing for an audience that just appreciates music, period.”

Florence + The Machine  took the stage as day turned to night, and Florence Welch’s energy gained more momentum with the setting of the sun. By the time she sang their most well known hits—including “Shake It Out”, appropriately dedicated to the audience’s hangovers, and “The Dog Days Are Over”—the concertgoers seemed utterly satisfied with the performance of the English indie-rock band.

Following an impressive showing of one of the most currently popular and innovative groups in music was a special show by a master of mashups. Gregg Michael Gillis—best known as   “Girl Talk”—entertained with a resonant bass and upbeat jingles that fit the untamed vibe of the outdoor festival and got the mob dancing along effortlessly.

In the end, however, the entire weekend led up to a two-hour feat by one of the crucial grunge bands of the 1990’s: Pearl Jam. Starting out with “Why Go” from their debut album celebrating its twentieth anniversary, the crowd seemed immediately immersed in the alternative rock blaring across the Piedmont venue.  The experienced and somewhat aged members lost absolutely no vigor as they tore through a packed set-list: “Save You”, “Animal”, “Even Flow”, “Alive”, and concluding with a brilliant rendition of Neil Young’s “Rockin’ in the Free World”.

As fans flocked out of the concert down 10th Street, one could only hear positive remarks and feel the exuberant ambiance.     Even the awful traffic caused by the 50,000 concert goers as they came and went saw little complaint. The revitalization of Music Midtown was largely viewed as worth the wait.

Hopefully, the remarkable turnout and embraced experience will allow Music Midtown to continue its presence in Atlanta and grow more in the coming years.