As if Justin Bieber was just not big enough, Canada has once again shown that it is no beginner when it comes to producing entertainment. Little Mosque on the Prairie is a Canadian sitcom that pictures the ongoing battle between Muslim and Western society, mainly focusing on the challenges faced by a group of Muslim people living in the western world. Debuting in 2007, the show depicts themes of intercultural mixing and acceptance, often times to surprisingly comedic results. 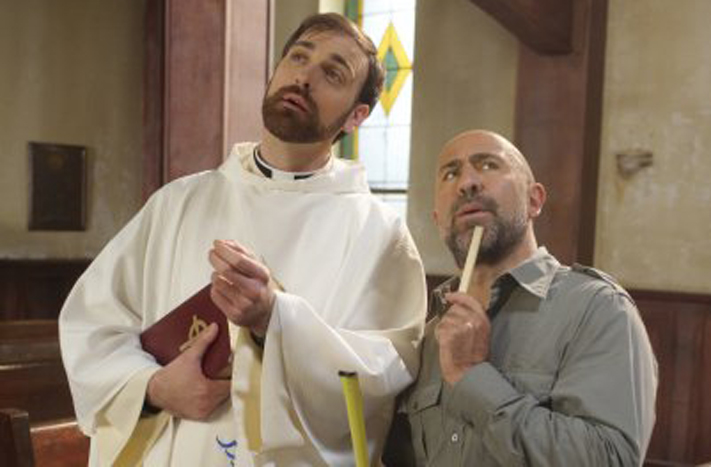 The pilot episode begins with a traditional Muslim prayer session in a very nontraditional setting, an Anglican parish hall. The prayer is interrupted by a local roofer looking for the church’s pastor. This would have been fine if the community was aware that a mosque actually existed within the walls of the Anglican church. (Yasir, the initiator of the mosque, rented this hall under the alias of a construction company. Building an actual mosque was out of the question in the small, fictional town of Mercy, Saskatchewan.) The roofer (a caricature of a typical ignorant Westerner) proceeds to expose the church to the community, and the remainder of the episode parallels the life of the new imam (the leader of a mosque) Amaar Rashid.

Stereotypical situations arise throughout the episode, such as when the young, liberal imam struggles to board a plane after a series of misheard phone conversations, resulting in the airport security refusing to believe that Amaar is a legitimate citizen.

Creator and writer Zarqa Nawaz strives to present cultural differences in a subtle, yet jocular fashion. She addresses these issues by presenting situations of xenophobia laced with comic relief. Filled with jokes about “dropping the bomb,” the characters poke fun at their own culture, and these over-exaggerations of terrorist remarks and western ignorance demonstrate how unnecessary it is the fear of outsiders.

How does this television show relate back to our own culture? After the attacks of Sept. 11, many Americans remain wary of outside cultures. Anything out of the “ordinary” makes us uncomfortable and uneasy, and instances of racial profiling plague the new members of American and Canadian society. Since 1971, Canada has seen a major increase in Muslim immigration, and the population of Muslims in America is expected to double within the next 20 years. However, even though their numbers are increasing, Muslims still find themselves isolated in a society that does not know how to comprehend their beliefs and practices.

If Americans are to take anything from this show, it should be that America was founded by a cornucopia of different nationalities, and we often forget that this melting pot would not be in existence without the contributions of other nations. Muslims have come to this nation seeking the same things as our ancestors: freedom. The lessons of acceptance and diversity in Little Mosque should be applied to our everyday lives.

On a more technical level, the plotline of the show tends to come off as slightly flat, while the acting leaves much to be desired. However, even though the show is found wanting in these areas, it is a decent sitcom overall. And unlike many American comedies airing these days, Little Mosque on the Prairie may actually have the ability to incite social change.

Whether viewers seek some simple comedic entertainment, or just want to learn a few things about a not-so-distant culture, this television show is worth watching.