Rogers and Hammerstein’s landmark musical, The King and I, entertains audiences for a limited time at the Fabulous Fox Theatre. The culture clash story may entertain diehard fans, but neophytes may find it too simple. This problem is only magnified by the lackluster portrayal of one of the main characters. However, the other lead shined with an impressive voice and great delivery. 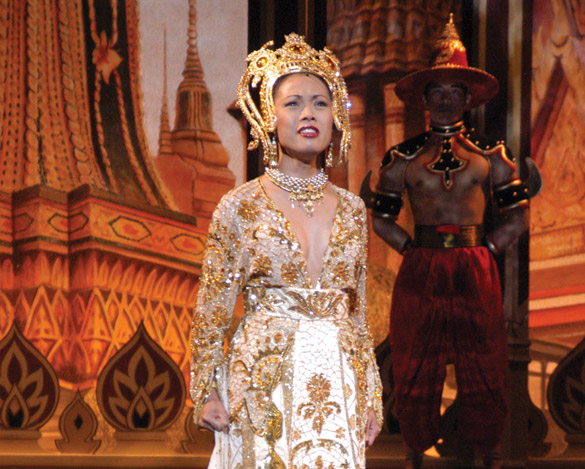 The story revolves around a British schoolteacher who takes a post in Siam in the 1860’s. The schoolteacher is to teach the children of the King of Siam in order to help bring Siam into “modern” times. This story is based on the book Anna and the King of Siam, which is in turn based on the memoirs of Anna Leonowens, who was the real-life governess of King Mongkut’s children.

The musical is one of the most successful of its genre, winning Tonys, being turned into an Academy Award-winning movie and becoming a mainstay in theaters all over the world. This production at the Fox harkens back to the original production in 1951, possible because it is directed by Baayrok Lee, who played Princess Yaolak, one of the king’s children in the original 1952 Broadway production.

The show is definitely old-school, with a simple story and a few big musical numbers. The plot is straightforward and easy to understand, which makes it a little ho-hum. The show explores the relationship between the king and schoolteacher, each representing their individual cultures.

The show is meant to be less about plot and story and more about character study. This is unfortunate for the Atlanta production, because the portrayal of the King of Siam by Ronobir Lahiri fell flat. He did not embody differing levels of anger and confusion in the musical, but instead portrayed the king with only one level of anger in all situations. Ultimately, Lahiri did not show the audience different sides of the character, thereby characterizing him as hardly more than a secondary player.

By the end of the play the characters should be changed due to their experience, and where there was once bitterness and feuding, there should be occasional love and understanding. By the end of this production, the audience does not know the king any better due to the lackluster performance.

On the other hand, Lahiri’s expression of the king may only seem dim because of Victoria Mallory’s shining portrayal of the schoolteacher. The subtlety of her voicing and physicality instantly indicated to the audience the kind of person this character is. Her heavy résumé justifies her success, and the few songs that her character sings shine brightly, as Mallory’s voice is the best female voice in the show. It is no surprise that she is a voice teacher in her time off the stage. (On a side note, the best male voice goes to Josh Dela Cruz in the role of Lun Tha.)

The Fox’s Moorish design perfectly plays into the exotic, tropical backdrop of the show at hand. The atmosphere of the building itself, from the bathrooms to the balconies, augments the experience of the show, transporting the audience to another culture in another place in time more effectively than the show by itself ever could.

The biggest problem of the show is the story, which is rather boring as an anti-romance. Only compounding this problem, the king’s character does not feel fully fleshed out by the final curtain fall; on a show that relies heavily on two main characters, one of them is a dud. However, the joy of Mallory’s talent shines brightly through the theater.

Overall, the show is good enough for people who know what they are getting into, but it falls far short of the mark established by the 1956 movie.