In most Hollywood car chases, bicyclists are the ones that get hit or get in the way. But not this time. Showcasing the form of intensity that comes from mixing high-speed chases with extreme cycling, Premium Rush hit theaters on Aug. 24. 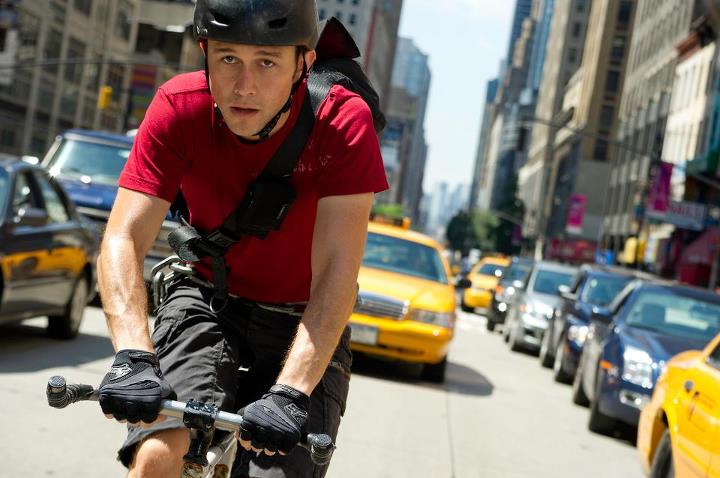 Viewers who were intrigued by the reasonably original concept may find this film lacking in other areas. The plot follows a range of characters through the events of a single day in New York City. The main protagonist, a bike messenger named Wilee (Joseph Gordon-Levitt, The Dark Knight Rises), finds himself in over his head when he is hired to deliver a mysterious envelope and subsequently becomes the target of a dirty cop (Michael Shannon, Revolutionary Road) who seeks the envelope’s contents.

A race against time ensues, with Wilee having to speed through traffic on a bike without brakes, avoiding cars, pedestrians and those who want the precious envelope he is carrying. On account of the film’s unusual storytelling method, each character’s role and timeline is shown individually, allowing the audience to witness the same few hours repeatedly, but from a different perspective each time. As each sequence of events unfolds, the action is carried from the paths of Central Park to the streets of Chinatown.

In the area of rapid-fire action, Premium Rush has crowd appeal. The streets of New York are as good as it gets when it comes to chase scenes at breakneck speeds. However, when the film is nothing but rapid-fire chase scenes, the audience tends to lose interest. Sadly, most viewers may find the film guilty of this crime, growing tired of seeing the same chase seen reenacted multiple times.

Premium Rush has a wide variety of characters, but none of them are particularly complex or appealing. Because most of the characters’ screen time involves them racing around at speeds topping 50 miles per hour, little time can be devoted to investigating individual characters. In other words, the film has action that is entertaining, but it never takes the time to develop other areas like character depth and plot intricacy, leading to shallow story telling.

That being said, Gordon-Levitt does a fair job in the lead role, providing his character with the appropriate amount of attitude and comic relief. In light of his recent stoic and hard-faced performance in The Dark Knight Rises, as well as his lead role in the upcoming film Looper, Gordon-Levitt has displayed a range of characters this year. Even though that range may not be particularly wide or fascinating, it has been enough to keep his performances interesting and refreshing, with Premium Rush being no exception.

Shannon’s portrayal of the rogue cop is also enjoyable to watch, albeit slightly annoying at times. Whereas Gordon-Levitt provides his character with sharp wit and a dare-devilish attitude, Shannon’s character is more that of a man teetering on the line between menace and psycho, giving him an entertaining sense of unpredictability.

As for the rest of the cast, they each give performances that keep the film on its feet and moving forward, but there is not much that sticks out in a way that keep viewers wanting more.

On the whole, Premium Rush may not be the most enthralling blockbuster to reach the big screen, but it will be up to audience members to decide whether or not it is worth the ticket price.

The action flows nicely, and there are a few Hollywood-style stunts thrown in, but the characters and storyline may seem weak in comparison. If viewers want a movie that will entertain them, but not completely blow their minds, this film may be the right choice.