Cathy Rigby stars as Peter Pan until August 12 at the Fabulous Fox in Midtown. The famous musical fantastically utilizes Rigby’s gymnastic ability as she breathes life into an otherwise ho-hum story. Rigby steals the show and the high-flying spectacle is sure to entertain kids, but may leave the adults wanting a little more story. This musical emphasizes dancing over song and only has a few musical numbers. 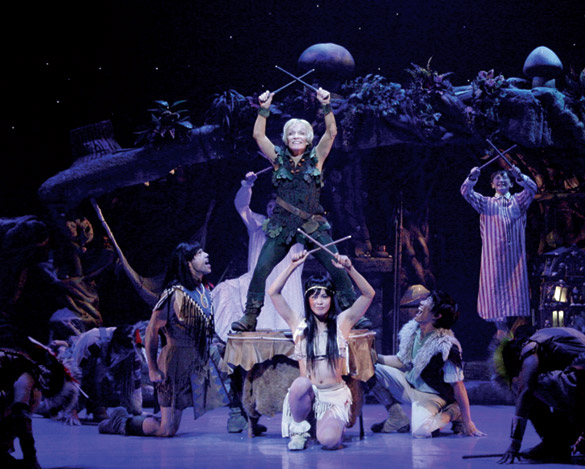 The show stars Cathy Rigby as Peter Pan for the fourth time. She originally played the role in 1990 on Broadway and has played it for years since. However, your parents probably know her as the world-famous gymnast. She won many international awards, including Olympic medals, as well as the hearts of the world with her spunky attitude and spiky pigtails. After her sports career, she dove headfirst into the entertainment industry, joining ABC Sports for eighteen years. She launched herself into the theater with years of training and practice and starred in productions both regional and national. She has won Emmys and been nominated for Tonys for her fantastic rebirth onto the stage. She is probably best known for portraying Peter Pan, which she has done on Broadway and throughout the country on tour.

Her great gymnastic talent came in handy for the high-wire stunts of Peter Pan. As everyone knows, Peter Pan can fly, and to make the actress do the same, she gets hooked up to a system of wires and pulleys to assist the non-magical human actor into and around the air. Rigby flipped and spun up, down and all around, all the while maintaining control and amazing grace. She looked as if she’d been flying her whole life, and in a sense she has between years of gymnastics and playing Pan.

She is in complete control of her physicality, both in the air and on the stage. She hilariously captures the mannerisms and characteristics of a little boy; she fidgets, plays with her clothes, climbs on furniture and invades personal space. As a lifelong gymnast, she even has the same body shape as a little boy. She portrayed Peter Pan so well in both her acting and stature that she successfully drives a fairly boring show.

The appeal of the Peter Pan story is baffling. Most children desperately want to be older than they are, not stay children forever. The ability to fly is appealing, but the rest is terribly confusing, at least to this audience member. Young Wendy would leave her mother indefinitely for a strange boy and a strange place? Character motivations aside, the story in this production is too simple for its own sake. It is the standard Peter Pan story with the pirates, Indians (Native Neverlanders?), crocodile and Tinker Bell, but the reason the pirates are enemies is never revealed. Peter Pan and the Lost Boys just must fight them, and don’t ask too many questions about it.

This must be a show for children because it relies on spectacle rather than story to engross the (young) audience. There’s flying, glitter, sword fights and pirates, all of which keep the attention of the little ones much more easily than the post-pubescent crowd. On opening night the audience was filled with children and the parents who love them. From the laughs, and later the cheers for Tinker Bell’s revival, it sounded like the kids enjoyed it.

Technically this is a musical, but there wasn’t much music. There are perhaps three or four musical numbers and hardly any virtuosic singing, especially by the title character. However, there’s lots of dancing and choreography to try and keep the fantasy going.

Although Rigby makes the show worth watching, little else justifies the ticket price for the average college student. Fans of the Peter Pan mythology will not be disappointed, as won’t children, but the simplistic story and archetypal characters leave a little to be desired for the more mature theatergoer. The show barely explores the possibilities of a musical, which can attract some but deter others. Attend this show with caution; expect glitter and flying, not characters and development.