Despite the close to 100-degree weather and the stress of having to choose from a plethora of bands featured on eight stages, the Warped Tour 2012 audience was incredibly persistent at not letting these obstacles prevent them from having a fantastic time. Hats, comfortable walking shoes and sunscreen were musts for the jam-packed show, but even those who may have overlooked one or all of those items were still completely dedicated to making this Warped Tour as memorable as possible. 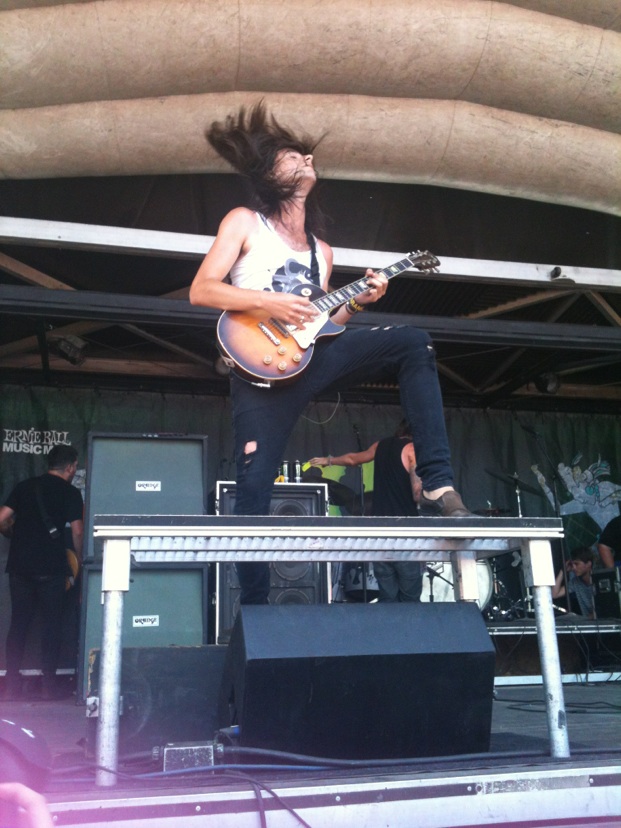 [/media-credit]A slogan of “The last one?”, featured on the official Warped Tour 2012 shirt, served as a strong source of encouragement for the audience, who certainly took that note to heart as they made the day one to remember. Even though the weather called for scorching temperatures, the line for Warped Tour began forming long before the gates were even open. While waiting in line, fans eagerly discussed getting the chance to see and snap a picture of the giant, inflatable list of show times for each of the featured bands. Once people started to filter into the amphitheater, the organized chaos of Warped Tour began.

With countless possibilities available to the concert-goers immediately upon entering the gates, they were able to participate in a wide variety of events right from the start. Whether it was rocking out to one of their favorite songs, waiting in line to get autographs from a band, buying some new fan merchandise or just taking a breather from the sunny weather with a cold drink, people instantly began to fill every area of the amphitheater.

Band’s sets were obviously a large draw of the Warped Tour, whose audience managed to make appearances at every show. Whether it was a newer or more advertised band, each respective crowd rallied an incredible energy to both support the band and enjoy the performance. Since the shows began as soon as the gates were open and did not end until the scheduled closing time, audiences were given a chance to catch performances from as many bands as possible. The most eager and energetic fans quickly learned the need to run from show to show thanks to the scattered stages, while those who were interested in catching only their most favorite bands chose to relax in the shade or walk around the tent-filled open area between sets.

The tents of Warped Tour were just as important to the crowd as the shows thanks to the assortment of bands and companies that were in attendance. The most crowded tents were those that featured the heavily anticipated signings. Fans lined up far in advance to get a great deal on merchandise and then have their purchases autographed by the bands right in front of them. Other frequently visited tents featured popular radio stations and huge sponsors, who offered exclusive access to a variety of bands.

A major hot spot of the Atlanta Warped Tour was the Kia Rio Stage, featuring some of the most notable bands as well as shaded standing and sitting areas. The popular stage was close to full for the majority of the day with fans getting the chance to either enjoy the bands in a relaxed area with overhead fans or up close and personal with an exciting pit that was always ready to sing along with their favorite artists.

Although the shaded area was a major appeal, there were still countless fans spread throughout the uncovered areas. With the chance to see so many bands, many refused to let the weather prevent them from checking out a favorite or taking a chance on a new band to expand their repertoire. Both well-known and developing bands appreciated this upbeat and energetic attitude from the crowd, making sure to thank them frequently throughout their sets.

Warped Tour’s audience was certainly diverse with ages ranging from eager children to supportive parents and dress from flannel shirts and jeans to barely-there bathing suits. This wide spectrum of people was a huge component of what made the concert successful and enjoyable. With so many unique styles of bands, each was able to experience an incredible crowd unique to Warped Tour.

Despite the variety in the audience, there was one large and incredibly apparent commonality – a love of music. It was almost expected to see everyone walking around with shirts of their favorite bands, homemade designs created specifically for this show or gear from previous Warped Tours. The audience was obviously devoted to making this Warped Tour one of the best, something they certainly made happen.

As day turned to night, those who were dedicated and able to stick around throughout the incredibly hot weather got to experience some of the most entertaining and energetic sets of the day. Pierce the Veil and All Time Low, clearly two of the favorites of the tour, put on amazing shows that did not disappoint the fans who had been anxiously awaiting their performances. Despite being tired and drained from the day, both the bands and the crowd were able to muster up a second, or third, strength to close out the night in a remarkable fashion. The audience belted out the lyrics and danced along with each of the band’s most popular tracks, creating a perfect ending for both the bands and the crowds.

Fans may have come unprepared or empty-handed to the lengthy, summery day at the 2012 Warped Tour, but it can certainly be said that everyone in attendance got the chance to leave with plenty of free stuff, invaluable autographed memorabilia and incredible memories that will leave them anxiously awaiting the next Warped Tour. 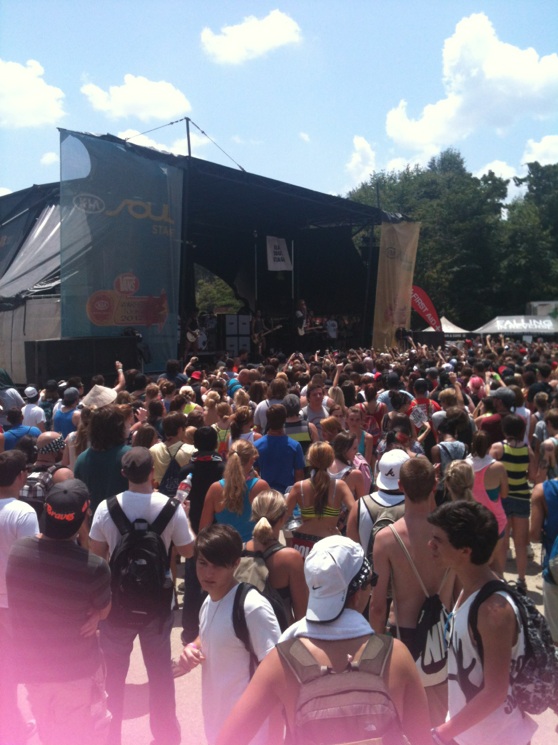