Atlanta’s foremost art museum is unveiling three new exhibitions tomorrow (June 9) as it revamps its temporary collection for the summer season. Two of the three exhibitions feature art that is distinctly Southern in both topic and style. 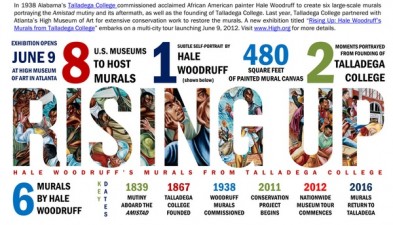 [/media-credit]The first of the new galleries’ main features are the murals of African-American artist Hale Woodruff. The 6 panels make up two murals, each with a tale to tell. One depicts the mutiny on the Amistad and the other features the founding of Talladega College. Both tell stunning stories of the fight for blacks from oppression to freedom. Along with the huge, colorful panels there are also numerous paintings and woodblocks that depict Atlanta and other places Woodruff visited with a range of subjects from lynchings to cacti.

Most striking though is Woodruff’s unique style – combining French impressionism with Cubism. His works all contain splashes of bright color, making the scenes captivating. His murals are also heavily influenced by the work of Diego Rivera, under whom he trained. Instead of the laboring of Mexican workers though, the sharp lines and contrasting hues tell the struggle of Black Americans both as slaves and as freedmen.

Progressing much further into Southern history, the latest installment of the Picturing the South commissions addresses new issues faced in Southern Americana. Three photographers’ works are displayed alongside one another, each telling of different aspects in the South. Shane Lavalette’s works show the prevalence of music from the Mississippi bayou to the Georgia forests and Kael Alford’s photos offer a stunning glimpse into the lives of post-Katrina post-Gulf spill Louisiana communities of Native Americans with a distinct French flair (the mix is as fascinating as it sounds).

Most interesting though are British photographer Martin Parr’s scenes from around Atlanta. These photos show the modern South at a crossroads as communities hold on to the past in gospel churches and BBQ joints, while there is a significant push forward as many residents try to redefine what it means to be Southern. To them it includes attending high class horse races and art openings in a city with Gay pride marches with cultures that expand beyond black or white. Parr effectively reveals this struggle – and more – in his series.

In a nice contrast the High is also displaying the aptly named Picturing New York simultaneously. These photos are on loan from the Museum of Modern Art and show New York through its history. The pictures are divided into people, buildings and events showing the diversity of the city that never sleeps. The exhibitions paired together, coincidentally or not, reveal stark contrasts between the Northern and Southern cultures giving patrons a nice opportunity to see both themselves and others.

Lastly, one other new exhibition opened last week and is definitely worth visiting. Another series of photographs from a previous commission of the Picturing the South alongside new shots form the basis for Richard Misrach’s  Revisiting the South: Richard Misrach’s Cancer Alley. These photos are taken along a stretch of the Mississippi from Baton Rouge to New Orleans known as the infamous Cancer Alley with hundreds of chemical and industrial plants degrading the local environment. Misrach’s photos show the struggle of the area as residents try to live in such conditions.

The offerings of the High this summer make a trip to the museum well worthwhile – even more so than usual. The purpose of the High as the largest art museum in the Deep South should be twofold: to display and celebrate Southern culture and to allow its residents to experience others.  The past few major exhibits featuring works by Dali, Picasso, Warhol and others have done an excellent job of the former, without much regard to the latter. These exhibitions fulfill both exceedingly and offer new fuel to the growing question of not just what it means to be American but to be Southern.

These temporary collections will be shown through Sept. 2 at least, but open this weekend. Also remember when visiting that the first Saturday of every months is free for Fulton County residents (or those with a student ID from a Fulton County school, i.e. Georgia Tech). There are also numerous other specials on admission throughout the week both for students and for everyone – but it should be noted that these offerings alongside the permanent collection make the normal admission price well worth it.