The Fox Theatre’s latest offering, Jersey Boys, provided more than just a few surprises, soaring well beyond admittedly low expectations. Jersey Boys  is a bio-musical, taking after the slew of now contrived bio-pics, of the once famous Four Seasons from the 1960’s doo-wop era. The show proves more a kin to a tribute rock concert aimed at the geriatric community than a proper musical, but herein lays the simple pleasure of Jersey Boys  and The Four Seasons. 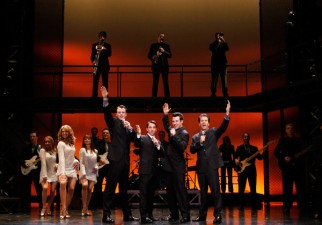 [/media-credit]Most students may not have heard of Frankie Valli or The Four Seasons, but they have almost certainly heard their music. It came as more than a slight shock to realize all of the songs that have ingrained themselves in American culture were all not just recognizable but from one band. (Even more shocking was that “Who Wears Short Shorts” was an actual song, not just a taunt or commercial song for Nair). The Four Seasons had hits throughout the 60’s making them one of the best selling groups of all time. Songs like “Sherry”, “Walk Like a Man” and “Big Girls Don’t Cry” though perhaps not recognizable by title, are more than familiar in melody.

The play begins slowly, almost painfully so, for one who is not familiar with The Four Seasons as group members switch seemingly every minute as leader Tommy Devito (Colby Foytik) nails down the quartet’s line-up. About a quarter through the play the group is three-fourths complete with Devito leading, bass Nick Massi (Brandon Andrus) and distinctive and classic lead singer Frankie Valli (Brad Weinstock).

Up to this point the songs though entertaining are unrecognizable and the plot blurred and hurried. The show hits its stride with the addition of final member, songwriter Bob Gaudio (Jason Kappus) who churns out the groups hit singles like clockwork. Troubles ensue and eventually the group disintegrates, but the plot in the show – though a true story – is deemed irrelevant instead focusing on the numerous hits the cast are obliged to touch upon.

The show contains many genuine laughs, but just as many are forced from contrived stereotypes of Jersey and other groups and areas of the time. The sound quality of the show was also variable, with backing instruments often drowning out the singers. Often songs could not be understood, but as they had no relevance to the plot this was of little matter. And for those unfamiliar, Frankie Valli’s distinctive vocals (or more accurately the imitation of them) can sometimes be gratingly high and annoying. But all of these negatives pale in comparison to the pure enjoyment that can be found from these tunes.

Jersey Boys also features sometimes spectacular staging, with elaborate cut-ins of video of the original group and innovative placement of the audience making them part of the group rather than the crowd. The story also employs an interesting narrative technique with each group member telling his part of the tale each in different periods (seasons) of the band’s career, allowing audiences to understand each of the members, their talents and personalities.

The Four Seasons rose to popularity at an interesting time in American pop history, battling first the Beatles and the British wave in the 60’s and then the rise of Motown in the 70’s. But The Four Seasons were not for the hippies or the discos, but were for Middle America – and have created a legacy that will continue to endure if not in their name in their music. “Can’t Take My Eyes Off You” and closer “December, 1963 (Oh What a Night!)” prove to be their most enduring singles, and the most popular with audiences. Jersey Boys never takes on the pretense of drama or art, but simply tells the story of how some of the greatest American music was made – and that makes it not just a worthwhile see, but great fun as well. Jersey Boys continues its run at the Fox through June 10.