Before A Wrinkle in Time was first released in 1962, it was rejected by 26 publishers for being too different. It was the first time that an in-depth, science fiction story revolved around a female protagonist, and many people considered the novel’s ideas too complicated for children. In spite of its troubled beginnings, it has become one of the most influential books in its genre. The story is that of Meg Murry, an awkward teenage girl who embarks on a fantastic journey to save her father from the clutches of an unspeakable evil. Now, on the book’s 50th anniversary, the Theatrical Outfit presents its own rendition of the recent stage adaptation by John Glore. 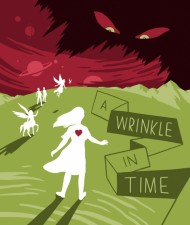 The play is a true example of storytelling, with six actors playing over a dozen roles as they narrate between scenes. While the production features strong performances all around, Andrew Crigler and Marianne Fraulo are exceptional as the five-year-old Charles Wallace and the mysterious Mrs. Whatsit, respectively. Crigler re-imagines himself with his expressions, from his childish grins to his penetrating stares. On the other hand, Fraulo plays the wise, mentor figure perfectly, her years of experience evident in her attention to detail. At one point, the group finds themselves gazing at a night sky as it is consumed by the encroaching darkness, and a torrent of emotions overcomes Mrs. Whatsit as she recalls her own unfortunate past.

As always, the Theatrical Outfit has created a beautiful set that completely utilizes the performance space. Though a number of set pieces were used, the keystone element to the set design was the video screen on the back wall. Clever use of video clips and images help to bring the audience into the scene without distracting from the actual players. Video designer and sound engineer Jon Summers does a wonderful job of setting the mood, one scene in particular presenting a surreal sky, but with a foreboding atmosphere through the use of conflicting visual and audio cues. The most frightening scenes, though, are when the characters “tesser,” an act which involves folding the fabric of time and space to travel long distances. These transitions are made all-the-more ominous through trance-inducing lighting cues and pre-recorded narration made disjointed by alternating the narrator mid-sentence. The majority of the play, though, is more uplifting than anything else, and is certainly worth attending.

The book came out at a controversial time, when the Cold War and the civil rights movement had only just begun, and violence was becoming a part of everyday life. A popular distraction at the time was the idea of other-worldly travel and the exploration of the final frontier, but even among science fiction novels, it addressed the issues of its time in a way that people were not used to. Of course, the values and lessons that Madeline L’Engle hoped to instill in people through her work hold true even today. Although the premise is that of a children’s story, A Wrinkle in Time is a larger allegory for people of all ages. This is a story about holding onto our individuality, about the difference that even a single person can make and most importantly about the power of love to overcome all things. While the message may be a cliché, it is one that is worth revisiting.