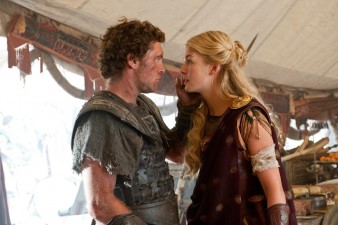 [/media-credit]With the faint smell of the summer blockbuster season in the air, moviegoers were once again brought back to the world of Olympic gods and mythological creatures on March 30 with Wrath of the Titans, the second installment in the epic tale of the Grecian hero Perseus. And this time, all hell has broken loose – or so the posters claim. Stunning visual effects contrasted against two-dimensional characters and dialogue may result in some mixed reviews for this film.

A decade after the events of Clash of the Titans, the half-god warrior Perseus (Sam Worthington, Avatar) is trying to live a simple, off-the-map life with what is left of his family. However, when Hades (Ralph Fiennes, Harry Potter), the scheming god of the underworld, threatens to release the massively destructive titan Kronos upon the world, Perseus is forced to reenter the battle between gods and men. Teaming up with fellow demigod Agenor (Toby Kebbell, War Horse) and warrior queen Andromeda (Rosamund Pike, Pride and Prejudice), Perseus journeys to the depths of the underworld to stop Kronos before it is too late, and end his war with the gods once and for all.

If there is one thing to say about the creators of Wrath of the Titans, it is that they went big. Enormous cyclops, mind-bending labyrinths and earth-shaking volcanoes create a massive, visually spectacular landscape for this movie. If only the cast were as lively as the computer animation, then this could have been a truly great film; as it stands, the cliché characters and flat dialogue cannot keep up with the pace expected of the epic film that Wrath claims to be.

The problem with the characters of Wrath of the Titans is that, with the exception of a few, they are simply too predictable. Most viewers could probably guess at the ending of the film within the first thirty minutes, and therefore all but lose interest in the rest of it. The dialogue sounds over-practiced and unnatural, taking away the credibility of the characters and leaving the audience with nobody to really connect with and root for. And, as with the first film, the wigs tend to comically fall outside the boundaries of believability.

As for the overall plot, Wrath tends to resemble its predecessor a little too closely. Hades once again tries to defeat the all-powerful Zeus, causing Perseus to leave behind his simple life once again in order to go on an epic journey with a band of warriors, climaxing in his final confrontation against a monolithic creature that seeks to destroy human civilization… once again. The resemblance between the two films is a bit of a downfall, as some might have wished that the writers had taken the story into a more unique direction. Of course, the two movies are not so identical to the point of blatant repetition; some surprising plot twists and new characters (as well as the deaths of some old ones) help to keep Wrath of the Titans interesting. Fans of the first film will no doubt be entertained, but it may be hard for new audience members to grasp the already-established story lines and character relationships. But they should still try.

On the whole, Wrath of the Titans lives up to the expectations set by Clash, and it will be up to fans to decide whether or not its phenomenal visuals outweigh its discrepancies in the character department. It may not be an Oscar winner, but if viewers are yearning for an entertaining action film, then Wrath should certainly not be overlooked.