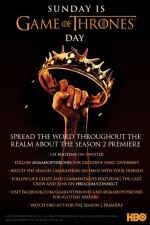 [/media-credit]The second season of the HBO original series Game of Thrones premiered on Sunday to the largest audience yet of 3.9 million viewers, according to Entertainment Weekly. Achieving a total of 6.3 million viewers after accounting for rebroadcasts and a prime fan base in the essential 18-49 year old demographic, the television version of George R.R. Martin’s fantasy series A Song of Ice and Fire is on the path for Season 3 renewal.

The episode is titled “The North Remembers,” and opens with a recap of the events of the first season, in which the fictional and extensive Kingdom of Westeros is left with a “king on every corner” after the death of King Robert Baratheon leaves the throne open to the winner of the games. Although Baratheon’s son Joffery claims the throne, his lineage comes into question when Eddard Stark, an old and trusted friend to the deceased King, comes to learn that Joffery is not Robert’s son, but rather the product of an incestual relationship between Cersei Lannister and her twin brother. The impulsive execution of Stark by Joffery creates war between the Stark family and the Lannisters, and sets the scene for the second book’s titular “Clash of Kings.”

After the introductory credits roll, the first scene highlights the sorrow of Sansa Stark, who is forced into engagement to the young King who cruelly sanctioned the murder of her father. Tyrion Lannister—the youngest of the power-hungry Lannister siblings—returns to King’s Landing to take the position of Hand of the King after the execution of Eddard Stark left the position open. Tyrion compensates for the impediment of his “dwarf” size with a biting wit, sarcasm and sharp intelligence that prove necessary to bring a semblance of order to the tyranny of his nephew’s  blood-thirsty mean character.

In Winterfell, the youngest of the Starks, Bran, is serving as lord in the absence of his mother and brother, who are away at war. The potential symbolism of the comet with a red streak for a tail is explored by characters across the world of Westeros, with each party interpreting it to mean something for the ultimate victor or loser in the game for the throne. Across the sea in the desert-like, arid land Daenerys Targaryen is traveling across with her three newly -hatched dragons. Jon Stark goes beyond the Wall into the wilderness of the North, with the mysterious ongoings hint at a greater problem for Westeros coming with the encroaching winter.

“Game of Thrones” is uniquely impressive with its ability to convey complex narrative content in manifold chunks that captivate the audience in classic HBO quality television brand fashion. In line with the HBO promise of quality television guaranteeing artistic freedom, violence, graphic content and lewd sexual scenes, the episode highlights the extreme disregard for the lives of humans and a shocking blurring of the line between good and evil.