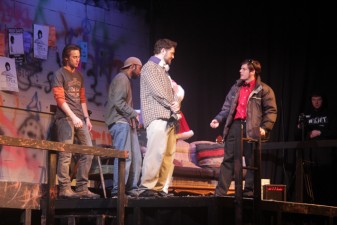 [/media-credit]DramaTech’s latest production is a bold undertaking. One of the most easily recognized musicals to date is Rent, a modern-day adaptation of La Boheme that follows the story of a group of impoverished artists struggling to make it in Alphabet City, a neighborhood in the Lower East Side of New York City. Among them is Mark, a filmmaker and the narrator of the story; his former girlfriend, Maureen, a performance artist; Maureen’s lover, Joanne, a public interest lawyer; Mark’s roommate Roger, a musician; Mimi, an exotic dancer, with whom Roger falls in love; Tom Collins, a computer genius; Collin’s lover, Angel, a street musician and drag queen and Benny, a former member of the group who, after marrying into a wealthy family, became their landlord.

What sets this particular production apart from others is the layout of the stage. Rather than having a conventional stage, the entire room is used and audience members are allowed to sit around the middle. However, this is not as simple as moving around some chairs, as the area allotted for seating is still actively used by the cast. The result is a much more immersing and hands-on experience for those willing. Audience members will find themselves in the midst of dance numbers as they are (even) encouraged to get up and participate. While being so close to the action allows for a better impact on the audience, it is not without its drawbacks.

For those unfamiliar, DramaTech productions are held in a black box theater, which is essentially a square room with black walls, the idea being lower maintenance costs and a greater focus on the actual people over showy lighting effects and complicated sets. However, due to the nature of the performance space, this leads to poor acoustics for a musical. While most auditoriums deal with this by placing an orchestra space beneath the stage, this is not an option for a black box production. Although dealt with as best as it could be handled, this was a prominent issue throughout the performance. The presence of a band sitting out in the open would often drown out the actors. Also, since audience members are not focused in one direction relative to the stage, speaker placement is made even more difficult.

If you have never seen Rent before, it might be better to put it off for another rendition since the acoustic issues make the play exceedingly difficult to follow. Otherwise, this is a unique production style that is not often see and is well worth checking out for those that enjoy being in the middle of the action.