The All-American Rejects’ fourth studio album, Kids in the Street, was released March 26 worldwide. Following their third album’s success with the incredibly popular sing-along track, “Gives You Hell,” the album had some high expectations to meet. Prior to release, the Rejects leaked two tracks with music videos for the songs “Someday’s Gone” and “Beekeeper’s Daughter,” which happen to be two of the most highly reviewed tracks on the album. Both of these songs are incredibly enjoyable listens and catchy tracks that definitely make a beneficial impact on the album and its success. 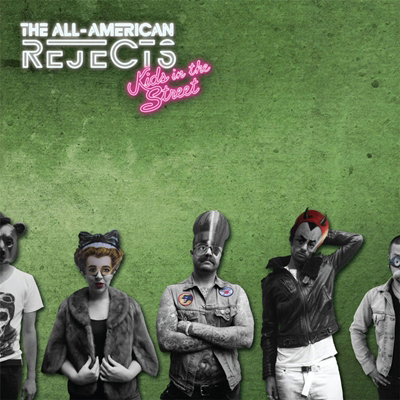 For the band as a whole, the Rejects have always been slightly overlooked, even with multiple successful singles. Their dedication to delivering quality music and careless attitude towards fitting into a mold is what sets them apart from other modern bands and what gives this new album potential. This is evident through the way Kids in the Street has already gained quite a bit of positive buzz and fantastic reviews, serving as a good indicator for the band and their new release.

The title of the album evokes feelings of nostalgia, innocence and fun, which perfectly correlates to the mood of Kids in the Street. This enjoyable atmosphere makes the album one of the Rejects’ best efforts to date, requiring maximum volume and multiple listens. Kids in the Street is powerful and well-rounded thanks to the band’s bold creativity and upbeat attitude. Despite the band’s growth in this album, they have not left behind their signature elements of big guitar hooks, great melodies and sing-along choruses that have made them into a powerful and popular band. Kids in the Street even possesses the potential to get listeners off their feet and encourages them to start really living, which is quite a difficult feat to accomplish for any band today.

One interesting and somewhat strange element of the album is that the lyrics are not always as positive as the album’s title and accompanying music would imply, appealing to listeners’ curiosity. Although some critics may argue that this factor takes away from the album’s overall enjoyment, surprisingly, it instead adds to the album as a whole and makes for a more balanced and enjoyable listen.

The titular tracks exemplifies the album’s overall atmosphere thanks to reminiscent lyrics and an upbeat rhythm with an electronic feel. Even with close to a five minute length, the song certainly deserves at least one listen, due to its reflection on the carefree and fun days of the past. Additional elements such as a strong drumbeat and the singer’s ability to paint a beautiful picture provide this song with the ability to serve as a timeless classic.

Songs such as “Beekeeper’s Daughter” and “Fast and Slow” are some of the most upbeat and energetic tracks that serve as great assets to this new album. “Beekeeper’s Daughter” shows off the band’s musical abilities with a great guitar solo, jumpy beat and catchy lyrics. The band’s musical talents continue to shine in “Fast and Slow,” which has a mature sound and an upbeat guitar rhythm. The lyrics of this song are great as well, showing off the band’s acuity and truly twisted attitude.

There are also more emotional songs as well like “Someday’s Gone,” “Out the Door,” and the eerie track “Bleed Into Your Mind,” all of which add unique elements to Kids in the Street. These songs utilize various methods of sound to make them memorable and effective tracks. “Someday’s Gone” is  especially potent  thanks to its ability to make listeners sing along, laugh and think—simultaneously.

“Heartbeat Slowing Down” is a powerful electronic track on the album that contains a slow beat while “Walk Over Me” counters the song with a huge energy and incredibly fun rhythm. As the album comes to a close, there is a romantic-sounding song featuring a smooth strings section called “Affection,” which is followed by the final track, “I For You,” a powerful acoustic ballad.

While other bands and artists have become more predictable and simple, the Rejects continue to break the boundaries of rock and roll music with Kids in the Street. The band’s candid attitude and more mature sound in their music makes the record cohesive and allows it to tell an interesting and captivating story. The Rejects have certainly stepped outside their comfort zone as well, bringing elements of freedom and fun that will definitely make the album successful and rank it as one of their best. Overall, Kids in the Street serves as a great proponent for the fact that the music world needs more bands like the All-American Rejects.