After nearly 18 months off the air, AMC’s award winning drama Mad Men finally returned to television last Sunday evening with the two hour premiere of its fifth season, titled “A Little Kiss.” The extended break meant it had been quite some time since our last episode with the employees at Sterling Cooper Draper Pryce (Season Four ended in October of 2010), but the episode did an excellent job of reintroducing viewers to the show’s colorful cast and catching us up on their lives. 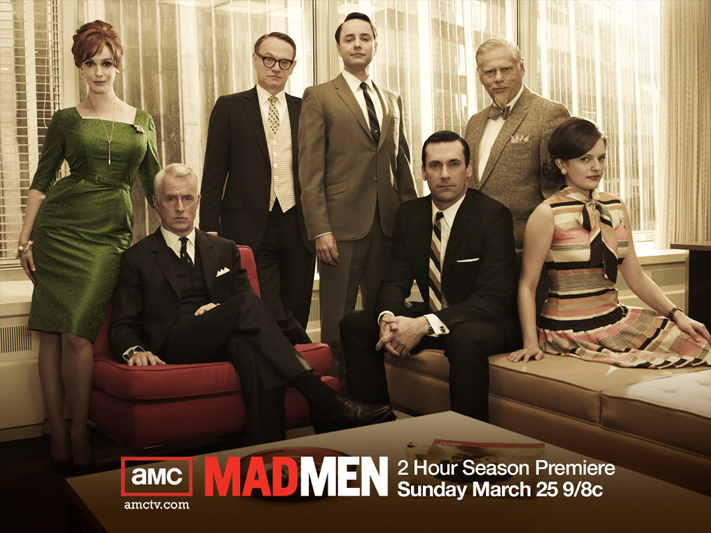 [/media-credit]Season Five kicks off in the summer of 1966, and centers on the days surrounding Don Draper’s 40th birthday. Sterling Cooper Draper Pryce remains strapped for cash, but business is steady. Life has changed for series regulars Peter Campbell and Joan Harris, who have both become parents during the show’s hiatus. Meanwhile, Lane Pryce has reconciled with his wife, Peggy remains her typically ambitious self, and Don himself is a newlywed, sharing a new apartment with his secretary-turned-wife Megan.

As has become the standard for Mad Men, the episode’s writing was clever and believable. Most every character feels real and alive, although some come across as shallow, being little more than standard archetypes used to fill office positions. However, the main cast continues to shine, and “A Little Kiss” delivered more than its fair share of entertaining moments (none better than Harry explaining in detail the things he would do to Don’s wife, completely unaware of the fact she was standing behind him).

Pair the cast with the show’s meticulously designed sets and watching an episode of Mad Men continues to feel like staring directly into the 1960’s. Cars, clothes, haircuts, habits and attitudes all come straight from a time fifty years past, and creator Matthew Weiner’s nearly impeccable attention to detail continues to impress.

Admittedy, the plot of the premiere moved slowly, and it felt as if less happened in this two-hour episode than is standard for a typical one-hour showing. It allowed viewers to really get reacquainted with the lives of all the characters, something necessary after such a long break between seasons, but by the end of the episode things were beginning to drag. Thankfully the show will return to its usual 60-minute format next Sunday, which should rectify the insignificant pacing issues that marred the premiere.

“A Little Kiss” also does a good job of setting up plot points that may well persevere throughout the season. Don’s birthday set the backdrop for an obvious growing chasm between the older and younger generations on the show, and the episode cast a serious glance in the direction of the Vietnam War and the Civil Rights movement. As the season progresses, it’s likely the show will also examine the drama of the Cold War and Space Race, which were both significant occurrences of the period.

Mad Men’s fifth season premiere wasn’t perfect, though “A Little Kiss” was an excellent example of why Mad Men has won so many awards in its four years running. The characters are rich and fascinating, the story is engaging, and every episode takes an unparalleled look at America in the ’60s. If you haven’t watched the show before, you owe it to yourself to check it out now.