The Technique had a chance to chat with Marvel’s new Editor-in-Chief, Axel Alonso about their huge summer cross-over event, Avengers vs. X-men (AvX).  Alonso has worked with DC and Marvel, Here is what he had to say about the event, set to hit stores April 4. 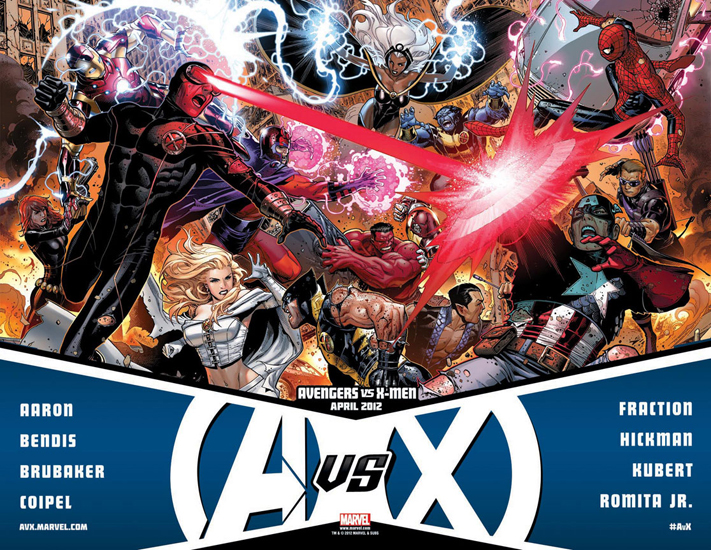 [/media-credit]Technique: Marvel is billing AvX as its biggest cross-over event ever. What makes AvX so groundbreaking?

Alonso: The world’s two most powerful super-teams have never gone to war like this. All corners of the Marvel Universe are equally engaged in this story, and affected by its outcome. The X-Men have either sat out, or played tangential roles in, our previous big summer events. With Avengers vs. X-Men, they don’t. We simply haven’t done an event of this scale.

Technique: There are a lot of big names involved with AvX: Brian Michael Bendis, Matt Fraction, Jonathan Hickman, Ed Brubaker, Jason Aaron, Adam Kubert, John Romita Jr. and Olivier Coipel. As Marvel’s Editor-in-Chief, how do you foster those unique talents and make sure everything stays cohesive?

Alonso: It’s called teamwork. The scope of this event simply required the brainpower of some of our most respected writers and artists. Luckily, the team is a mutual admiration society that gets along extremely well.

Technique: Superhero comics are known for their huge and complicated histories. That lore frequently intimidates or deters new readers from diving in. Are there any crucial issues or collections that will help bring comic newcomers up to speed for AvX?

Alonso: We designed Avengers vs. X-Men to be new-reader friendly, so you don’t have to read anything before you pick up issue #1 to be able to get right into the story. The setup couldn’t be simpler: a comet that razes worlds and plants the seeds for new life in its wake is headed toward Earth. The Avengers and X-Men take very different positions about what this means for the fate of the planet – positions that cut to the very core of who they are and what they stand for. The threat, the stakes, the battle lines – everything is set up very quickly.

Technique: Civil War garnered some criticism for being too political. The X-Men franchise has a history of grappling with political issues like civil rights. Are we going to see any of those issues emerge in AvX?

Alonso: Avengers vs. X-Men doesn’t provide a clear-cut political allegory like Civil War, which commented on the zeitgeist of the post-9/11 world, but it is far from simple. Both sides of the battle-lines have defensible positions —there isn’t a clear-cut good guy or bad guy—but the battle will provide twists and turns that will test the loyalty of both the characters and, indeed, readers themselves. Fans are already pledging allegiance to a side before the first issue hits stands April 4, but I wouldn’t be surprised if a lot of them switched sides before the story’s over.

Technique: Marvel has done a lot of cross-overs. Some have been very well-received by fans, while others have been unpopular. What are some of the lessons you, and Marvel as a whole, have learned from previous cross-over events?

Alonso: Problems occur when readers detect fat on the bone. With Avengers vs. X-Men we’re looking to provide a focused, high-intensity event that crosses over only into the core Avengers and X-Men titles that are affected by it. There are fewer tie-ins and they all count.

Technique: You have worked with the two biggest houses in the comic book business. What are your favorite projects from your time at DC and Marvel?

Alonso: That’s like picking a favorite child. I’m proud of work on both sides of town because they required me to use a very different set of muscles. I’m proud that the very alternative Preacher actually got to the finish line on its own terms and I’m proud that my tenure as group editor of the very commercial X-Men line laid down the seeds that grew into the story told in Avengers vs. X-Men.

Alonso: Hit-Monkey. He takes no joy in his work. Do I need to explain further…?