Dr. Seuss’s classic children’s book The Lorax hit theaters on March 2 as a full-length animated motion picture to mixed reviews from audiences and critics alike. From the studios that created the widely popular Despicable Me comes this fantastical tale of man versus nature, complete with the zany characters and vivid landscapes for which Dr. Seuss is famous. However, as mentioned above, some viewers found the tale a bit too preachy and lacking in the depth needed for a successful animated film these days. 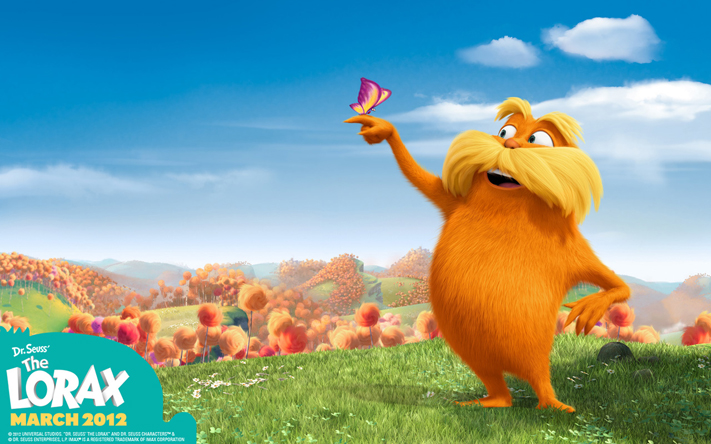 The story follows Ted (Zac Efron), a young boy living in the futuristic and literally plastic town of Thneed-ville, as he ventures out of the city limits to impress the girl of his dreams with the one thing that Thneed-ville does not have: a real tree. However, when he is met with a barren wasteland full of dead stumps, he must visit the reclusive Once-ler (Ed Helms) to hear the tale of what really happened to all the trees.

The Once-ler then proceeds to tell Ted about how, when he was a young man, he tried to cut down the trees for profit, and was then confronted by the mystical creature known as the Lorax (Danny DeVito), who “spoke on behalf of the trees.” After hearing the story, Ted is left with the task of planting the last seed on earth and bringing trees back into the world.

Despite stemming from the brilliantly creative mind of Dr. Seuss, The Lorax falls short as a film, opting for cheap laughs over deeper, more creative entertainment. Unlike Horton Hears a Who, another Dr. Seuss-adapted animated film released a few years ago that included the voice talents of both Jim Carrey and Steve Carell, the cast of The Lorax just do not possess that certain energetic quality needed to bring to life such colorful characters. DeVito and Helms could even be considered bland at points, which really puts a damper on the pace of the film. DeVito’s performance in particular is flat and forgettable, leaving little or no impression on the audience apart from a few inspirational lines, and completely falling short of the whimsicality of Jim Carrey’s Horton. Of course, this lack of impression is due to the fact that the character of the Lorax is pushed into the background by a script that fails to give him the screen time necessary for his character to fully bloom.

As for the actual content of the film, many critics have stated that the “save the environment” message is a bit too obvious and that The Lorax could be considered the poor man’s WALL-E, which received critical acclaim for its simple and artistic portrayal of the effects of human materialism. Most of the time, The Lorax is just too simplistic and formula-based; conflicts arise and are resolved too quickly, without any plot twists or even dramatic moments for viewers to latch onto. Certainly, the film is based off of a children’s short story, but maybe it could have benefited from not being so by-the-book.

On a more positive note, The Lorax does have a few laughable moments, even if they are slightly in the background of the actual story, or squeezed out as one-liners. Just as with the hugely popular “minions” of Despicable Me, it is in the secondary, sometimes even nameless characters that The Lorax finds its comedic foothold. Marshmallow-chomping bears, big-eyed birds and a cappella-singing fish provide the film with a much-needed yet short-lived  snicker or two.

All things considered, though, the most that can be said about The Lorax is that it is very colorful, very playful and a bit too straightforward and uninteresting at points. It coughs out a few quaint, rhyming words of wisdom here and there but is nowhere near the level of audience engagement or artistic integrity of a Finding Nemo or a Shrek. Taking into account its cliché characters and monochromatic plot, “average” is the word for this film.