With Super Tuesday having come and gone, the race for the White House has filled the airwaves with apocalyptic imagery and rhetoric. Unless we elect candidate X, the Republic will fall in shambles. If Party Y takes Washington, the U.S. will never again be great. 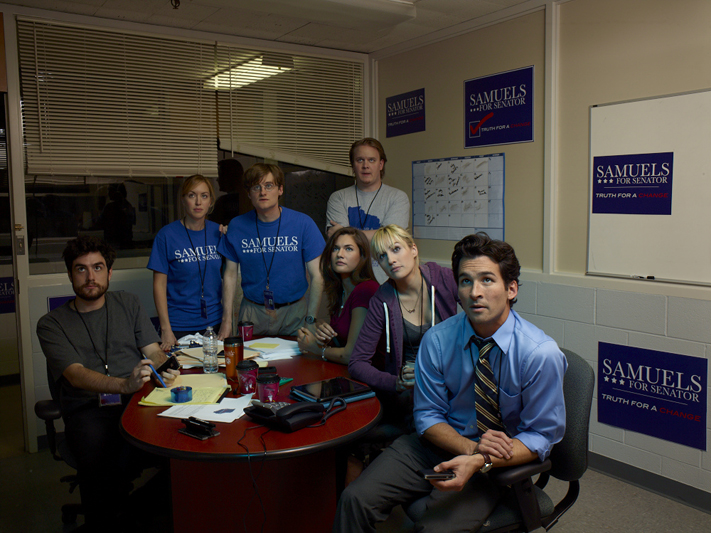 Hulu.com has a slightly different view with its first original show. Battleground—written, produced and directed by J.D. Walsh (Two and a Half Men)—chooses to ignore the title card fights for the nation’s future and instead focuses on the underdog struggles of an insurgent campaign for the U.S. Senate. By further confining the plot to the trials of the young campaign staff and relegating the politics to a supporting role, Battleground has so far succeeded in creating a light, fun dramedy that only occasionally stumbles in its quest to portray the people behind the candidate.

Chris “Tak” Davis (Jay Hayden) leads a team of staff and volunteers as they attempt to get State Senator Deidre Samuels elected as the next Senator from the state of Wisconsin. Joined by one-liner-spitting speech writer Cole Graner (Jack DeSena), sharply confident head of media operations K.J. Jamison (Teri Reeves) and awkward Renaissance Fair herald-turned-campaign volunteer Ben Werner (Ben Samuels), Tak spends each episode dealing with a problem of the week, ranging from the dull issue of a broken thermostat to the more critical issue of an incumbent Senator who will not show up to debate Tak’s underdog candidate.

A series of interviews conducted after the conclusion of the election underscore the drama, indicating that significant twists are waiting in the wings for the Samuels team.

Battleground, now on episode four of 13 as of March 6, is generally a well-scripted and tightly-framed mix between the drama of the West Wing and the goofy comedy of The Office. Walsh credibly takes the show through each dilemma facing the campaign and establishes an enjoyable cast of characters. Although the jokes are generally subtle and understated, Walsh succeeds in delivering at least one surprising laugh-out-loud moment per episode.

Every episode features both the campaign focused A-story as well as B-stories that look at the personal interactions between the characters. Here, Battleground fails to weave the two together. For example, Tak’s consummate devotion to the campaign has caused his wife to file for divorce, but it does not seem to even cross his mind as he interacts with his staff. When Tak’s personal life eventually bursts into the campaign’s operations, it comes across as awkward and contrived.

Like The Office, Battleground frames itself as a documentary, complete with occasional cameos by the film-making team. Unfortunately, the execution of the documentary concept is inconsistent, with the characters only sometimes realizing when their moments of weakness are captured on film and the placement of the supposed camera crew bordering on ridiculous at times. In The Office, the documentary concept serves the show well and knows when to get out of the way. Battleground has not learned that lesson.

These stumbles come to a head when the show attempts to ratchet up the drama, either on the campaign trail or between the characters. Battleground excels, however, when it tells the story of Tak and his team simply working the problems that come their way. The most charming moments of the show arise when the characters are lounging in the campaign’s headquarters thinking up an inventive way to counteract the latest bit of bad press or to manage the sometimes misguided, but normally well-intentioned, moves of others on the team.

Battleground is at its best when it remembers that it is not a show about politics, but rather a show about people just trying to eke out a win against tough opposition. The first part of the season established that even though the Samuels campaign seems like the underdog and has its share of dysfunctions, it deserves the attention and respect of the political establishment. The same holds true for the show that tells that story.