Bach wrote an oratorio for each of the four gospels, although only two survived, the St. Matthew Passion is one of them. The German lyrics (translated on screens for the audienc) tell the story of Jesus’ betrayal, arrest and crucifixion.  However, regardless of religion the timeless melodies remain as beautiful as ever – which the ASO and company perform with gusto. 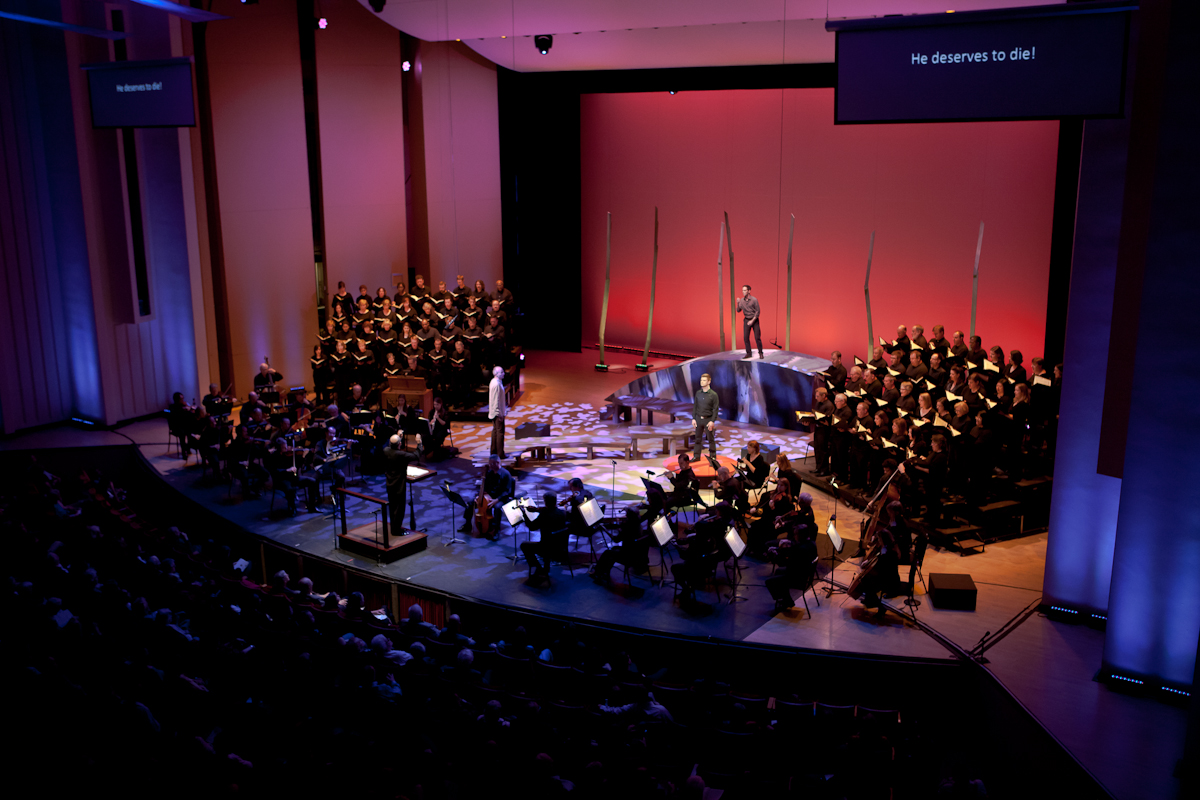 For this performance the orchestra was split into two parts, along with the chamber chorus in order to play the numerous different parts required to tell the story. Featured soloists sing and act the parts of familiar characters like Judas, Peter, Mary and of course Jesus. Members of the chorus feature in the smaller roles of priests, other disciples and various citizens. Together these voices combine to tell a story full of sadness, hope and mourning.

Though not a normal orchestra performance, this production is not exactly a play either; the singers do move around and act to some extent, but their function is still mostly to sing. However, some soloists prove more adept at combining these functions than others.  Tenor Thomas Glenn shined in the role of the Evangelist, narrating the story and leading the whole cast into their recitatives and arias. Mezzo-soprano Kelly O’Connor was quite memorable as Mary Magdalene, with soaring vocals – and despite a lack of acting in the first part managed to deeply convey Magdalene’s sorrow throughout the rest of her solos.

However, bass-baritone Dietrich Henschel, though a good singer, delivered an extremely stiff performance as Jesus, simply moving around the stage like an automaton. Also soprano Heidi Grant Murphy’s voice just did not carry the strength of the other soloists and left something lacking in the role of Mary.

Despite these weaker elements, the staging is quite interesting – albeit minimalistic. Director Anne Patterson takes the story of Jesus in a more modern direction and makes good use of the entire symphony hall, occasionally placing soloists and even whole choruses in the upper wings. This surrounds audiences as the different parts each converse and banter in the fight to kill Jesus.

Not to be outdone, the orchestra itself provided a solid backing for the choral heavy piece. However, the spotlight was stolen by instrumental solos from oboist Elizabeth Koch in the first act and violins David Coucheron and Justin Bruns during the second act. Despite the piece lacking a percussive element, it was held by the seemingly always present organ and cello parts.

The St. Matthew Passion is an impressive and moderately well-known piece. Interestingly, Bach ends the piece without a bang, ending with Jesus’ death rather than resurrection. Thus this oratorio lacks the ending joy normal to such pieces, but leaves the audience in sadness, doubt and confusion, much as the disciples were in the three days of unknowing in between the death and resurrection. This is a piece meant for Maundy Thursday, not for Easter Sunday. However, this makes the piece all the ore unique and worth-seeing.

A Theater of a Concert is a great place to start going to the symphony, with visual elements aplenty to keep the viewer involved in the music and story. However, at over 3 hours the St. Matthew Passion is a perhaps not the best for first timers. Despite the long running time though, the ASO provides a great deal of life into a story that has often been numbed into banality, providing a sense of urgency and drama that goes beyond religion. The symphony will hold one more performance of the St. Matthew Passion tomorrow night, March 10, before resuming their normal concert schedule. This is a performance not to be missed.