Director Joe Carnahan’s arctic thriller The Grey hit theaters on January 27, giving viewers a taste of how dangerous an environment the bitter North can be. Actor Liam Neeson (Taken), known for his portrayal of skillful, elite fighters, stars in the main role. Neeson previously teamed up with Carnahan in the 2010 action film The A-Team, which was met with slightly mediocre reviews by critics. However, The Grey may turn out to be a bit more deserving of the ticket price. 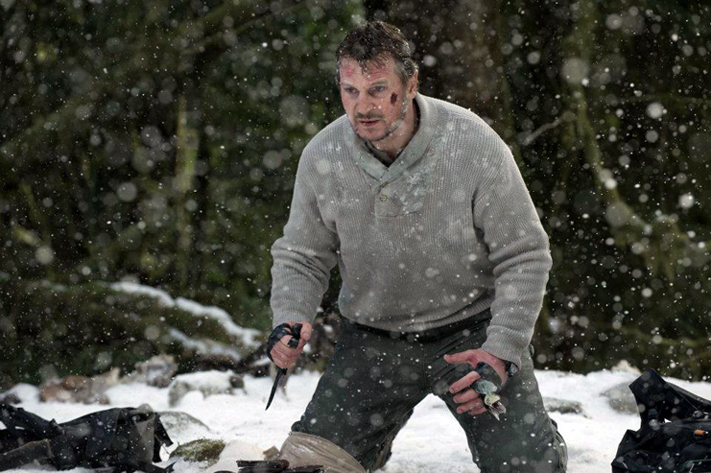 The film takes place in the barren tundra of the Alaskan/Canadian wilderness, where the temperature is below zero and the predators are fierce. Neeson breathes life into the role of John Ottway, a family-less man who works as a hired gun at an oil drilling station, protecting the men from the native packs of wolves that seek to hunt them. However, when their plane home crashes in the frozen wilderness, miles from civilization, Ottway and a few survivors must battle the cold and each other in order to survive, all while the wolves begin to close in, picking them off one by one. As their numbers begin to dwindle, Ottway must take up the position of leadership within the group even while dealing with his own inner demons.

The Grey could be viewed as an arctic version of Flight of the Phoenix: a group of men find that they must overcome their fears and band together if they are to survive the hostile environment that surrounds them.

However, while the acting in The Grey is engaging and worthy of praise, the plot tends to be a little too simple and straightforward. Rather than containing any major turning points, the storyline seems to just slope in the same direction, leaving the audience unconnected with characters, but rather simply wondering who is going to die next.

However, despite any letdowns with the plot, the non-human stars of The Grey are top-notch; the wolves of this film are vicious, calculating, and stalking, and the CGI technology used to create them is extremely hard to differentiate from reality. And their presence enhanced the story in more ways than one.

Due to the majorly antagonistic light in which the wolves were portrayed, early screenings of The Grey were met with controversy from organizations such as PETA and WildEarth Guardians, who claimed that the film placed too strong of a negative label on the species as a whole.

As a result, Carnahan downplays much of the physical confrontation between the wolves and the survivors, instead focusing on the character development of and the relationships between the men, which succeeds in giving the film a more philosophical taste.

All in all, The Grey may not be the most monumental or ground-breaking film of the season, but it does provide that certain untamed atmosphere that audiences have come to love in man-versus-wild films. In order to survive the animals that hunt them, the men must become animals themselves.

Ultimately, the suspense is satisfying, the characters are solid despite a two-dimensional story, and the landscape is magnificently barren enough to engulf the audience in a layer of awe and dread. And despite any boycotts, the animals portrayed are successful in providing that carnal instinct that makes you want to sleep with one eye open.