Eight years ago controversy embroiled Super Bowl XXXVIII’s halftime show, throwing Americans into a rut of seemingly endless, boring, and uninspired performances in order to just fill that obligatory gap between the first and second parts of the biggest game in American sporting. This year, the National Football League made a dicey and controversial choice in choosing pop-star Madonna to perform—ostensibly the polar opposite of football culture. Despite the risk, this year’s ended up being if not the best, then at least the most entertaining halftime show on memory. 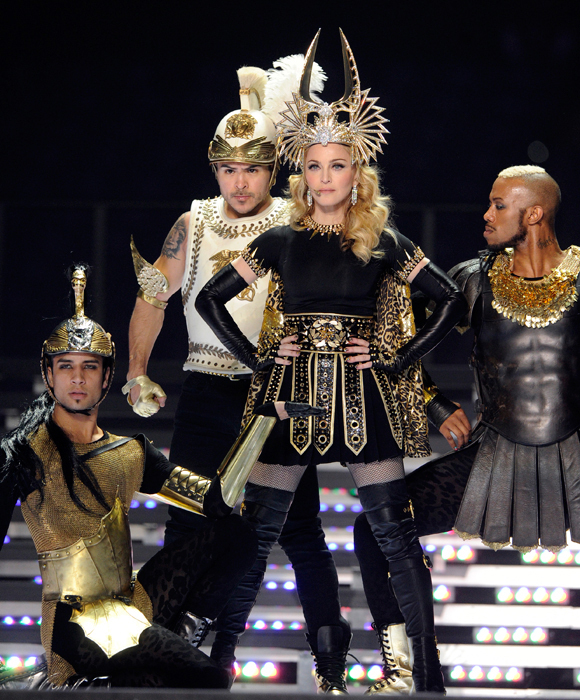 Madonna, to her credit, managed to pull off something nothing short of amazing for a 53-year-old in creating a show that was both relevant and nostalgic, all while falling within the confines of middle-America’s values. Taking the best parts of an arena-style pop spectacular and condensing them down to 12 minutes, Madonna called upon a behemoth cast to levy her performance. This included big names such as Cee Lo Green, LMFAO, and Nicki Minaj alongside large, non-singing groups like Cirque du Soleil.

Though both the cast and theme of the show changed with every song, Madonna provided a solid, constant presence through the whirl of sets and performers. Madonna has always been much more of a business woman than just simply a singer, and here she sold herself to all generations, glancing back with her eyes solidly set straight forward.

She smartly formed her shows around her biggest hits including “Vogue,” “Music,” and the literally show-stopping “Like a Prayer.” Through all these she incorporated guests and relatively new trends like parkour and slacklining, making her classics fresh for new audiences. The definite low point of the spectacular centered around her sub-par new single “Give Me All Your Luvin’” and mash-ups of LMFAO’s pair of hits, none of which even approach the pop music sensibility of her old material. But even in these low moments Madonna threw in some unexpected moments including her dancing the “shuffle.”

Unfortunately, this show was not without controversy. At the end of rapper M.I.A.’s guest spot she gave America the middle finger, invoking the ire of parents nationwide. This barely noticeable act, by a selfish narcissist has unfortunately overshadowed the actual success of the show. One can only hope that this disrespectful act of an individual will not throw the Super Bowl halftime show back into a decade of blandness.

Even though large pop acts carry a significantly larger potential for offense, they also have the potential to be significantly more entertaining. After Janet Jackson’s “wardrobe malfunction,” the NFL hired seemingly every classic rock group including Paul McCartney, The Who and The Rolling Stones, all of whom delivered adequate but boring performances on a stage that has so much more potential. Last year they shifted back to a more pop act with the Black Eyed Peas, whose performance could at best be called underwhelming.

Madonna proved not just her own marketability or her own entertainment value, reminding America what a halftime show can and was meant to be. Her show gained more viewers than the game itself and proved to be the highlight of the night for many not even familiar with the “Material Girl.” Even as she ages and her new music worsens, Madonna sets higher standards for both herself and others in what qualifies as a great performance.