At first glance, the spartan posters of Josh Trank’s Chronicle may offer the impression of yet another overblown and underwritten contribution to the annals of uninspired science fiction and action films. The cloudy expressions smeared across the lead characters’ faces and the tagline “It’s all fun and games until everybody gets hurt” suggest formulaic dialogue and misplaced austerity. Against all odds, debutante director Trank presents a candid and potent exploration of the uglier underbelly of adolescence and the detrimental effects of power, in addition to an engaging revitalization of the found-footage technique. 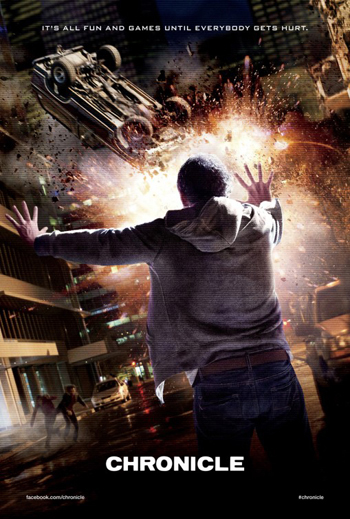 Critics and audiences alike have often pegged Chronicle as a superhero film. While the principal characters gain telekinetic abilities in the wake of an encounter with a mysterious, crystalline (and presumably extraterrestrial) object, there is nothing great or noble about the characters in question. The film chronicles the experiences of three suburbanite teenagers: socially withdrawn and vaguely handsome Andrew Detmer (Dane DeHaan), who resolves to document his life through video as a means of compiling evidence of his father’s physical abuse with his philosophizing cousin Matt (Alex Russell), and prospective class president Steve (Michael B. Jordan). Each struggles to fill the dissonance between his meager role in society and his potentially dangerous powers.

One of the film’s greatest assets lies in its humorously accurate depiction of the behavior teenage boys would exhibit with superpowers at their disposal. Rather than robbing banks or saving kittens from burning skyscrapers, the lead characters primarily use their uncanny abilities to goof off. The first 50 minutes of the film include animation of teddy bears in a local toy store and comical attempts at removing gum from a bystander’s mouth.

Trank and screenwriter Max Landis (son of John Landis) also construct a solid and dynamic trio out of their protagonists. Freud’s psychic apparatus comes to mind. While Andrew suffers extensive emotional tumult and loses his capacity to make rational decisions, his cousin serves as a source of morality and reason, and future politician Steve acts as an executive power amidst the three.

None of the protagonists prove particularly interesting in their own right, but the interactions they demonstrate as a group form an effective and entertaining mechanism.

The film also benefits from a refreshing mélange of found-footage and third-person shots. While critics far and wide have relegated the found-footage genre to the status of “gimmick,” Trank makes commendable use of the device as a method of furthering the plot and achieving a degree of intimacy between the audience and the character behind the camera that conventional cinematography could not ordinarily accomplish.

The filmmakers successfully tuck the beginning, middle and end of the story into a neat 83 minutes, but the climax of the film are convoluted and lack of direction. It is troubling to witness the transformation of a sympathetic character into a full-blown killer, but the physical and immaterial objects of the antagonist’s fury eventually become unclear.

One may draw more than a few parallels between Chronicle and 1976’s Carrie. The panoply of supernatural happenings notwithstanding, the former presents a more plausible and relatable portrait of an emotionally tormented teenager with a modernized backdrop.