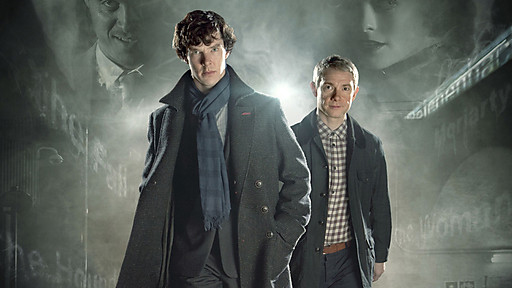 [/media-credit]Two Sundays ago saw the second season finale of BBC’s Sherlock, a modernized adaptation of Arthur Conan Doyle’s brilliant detective stories. Created and co-written by Steven Moffat, better known as the lead writer/executive producer for Doctor Who, the show bears his stamp in the Gilmore Girls-level dialogue and the determination that each episode be bigger and better than before. With critical acclaim and growing popularity, the series has been renewed for a third season (part of which has already been filmed), so now while between seasons seems a good time for a retrospective.

Sherlock Holmes is portrayed by Benedict Cumberbatch who gives the character a cold, authoritative dignity; Holmes is impatient with his inferiors (all other humans) and emotionally distant. When he does try to engage with another person, he comes across as awkward and out of his element. In deduction, Holmes has the same too-fast-for-mortals speech pattern as Moffat’s Doctor Who, a delivery that represents both characters’ tremendous speed of thinking. Holmes lives completely in the world of logic and deduction, and he detests or is confused by the sentiments of others. Refusing romantic entanglements, the only real joy he seems to get is in solving a case; though even this may require addictions like nicotine to pass the time in between.

The series has done an excellent job of modernizing Doyle’s 19th century stories. Holmes has always been as much an experimenter as he is a critical thinker, and in Sherlock he uses modern tools alongside deduction and observation. Moffat has a light touch in adapting the stories to a modern setting: Dr. Watson is still a returning veteran, although from a different war, and Detective Inspector Lestrade of Scotland Yard only has a bulkier title. Holmes’s use of technology is fun but sparing, with the focus remaining on his remarkable force of intellect and his determination to see a problem through to the end. The show remains faithful to the spirit of the books. Granted, Irene Adler may be a dominatrix now, but the core of the characters and their relationships to one another—particularly the strange friendship between Holmes and Watson, often misunderstood by those around them—remain the same.

Speaking of Dr. Watson, Martin Freeman (A Hitchhiker’s Guide to the Galaxy) provides skillful understatement to his role, a choice that is braver than emphasizing a character’s personality. Watson is not a bungling sidekick to Holmes, nor does he allow his exasperation with Holmes’s lack of feeling to seem cartoonish; he is very much the moral center to the series, which is something Freeman takes seriously. Freeman gives Watson a human touch, where another actor might have let the character waste under Holmes’s shadow or work too hard to be noticed. In Sherlock, the supporting cast around Holmes is nearly as important as the title character for people to identify with next to such an alien mind; none of these so-called “ordinary people” are more important than Watson, in the original stories or in the show.

The most unique character interpretation of the series, however, is Holmes’s arch-nemesis: the villain Moriarty. Moriarty is not the posh, refined, quiet gentleman from other adaptations, but cheery, a little fey, and totally insane. Andrew Scott does a fantastic job of making him into a frighteningly playful psychopath for whom the world is a game. To Moriarty, Holmes has the only intellect that might equal his; but rather than just seeing a potential opponent, Moriarty views Holmes as a real playmate in an otherwise dull and empty universe. This Moriarty seeks Holmes out, relishing their intellectual conflict. In both seasons their rivalry is always in the background beneath the usual mystery of the week, but the second season finale brings their fight to center-stage, with Holmes mostly on the defensive. The general plot of the finale will not come as a shock to fans of the books (or even those who have seen the most recent American Sherlock Holmes film with Robert Downey Jr.), but the twist on the way it is done subverts both the tone and apparent message of the original story. With the season finale, it is unclear to what extent Holmes is in control, compared to Moriarty’s genius without moral boundaries. In that episode, Holmes is given a real touch of humanity, both in his love for his friends and the feeling that he might be susceptible to failure.

Sherlock is a show of intelligence and complexity; with each episode having a full hour and a half to breathe, Moffat manages to fill every moment with breakneck dialogue and unexpected twists and turns. The show is easy to get sucked into, not only for the realistic setting of modern London or the brilliant execution of each mystery, but mostly for the excellent realizations of each of the well-known characters. After the season two finale it seems unsure what direction Sherlock will take; if Moffat intends to outdo himself every season, the upcoming year will be a challenge for him. But with the momentum of a capable cast, powerful characters, and sophisticated storytelling, the series is certainly capable to continue beyond the third season, and even beyond Arthur Conan Doyle’s original canon.