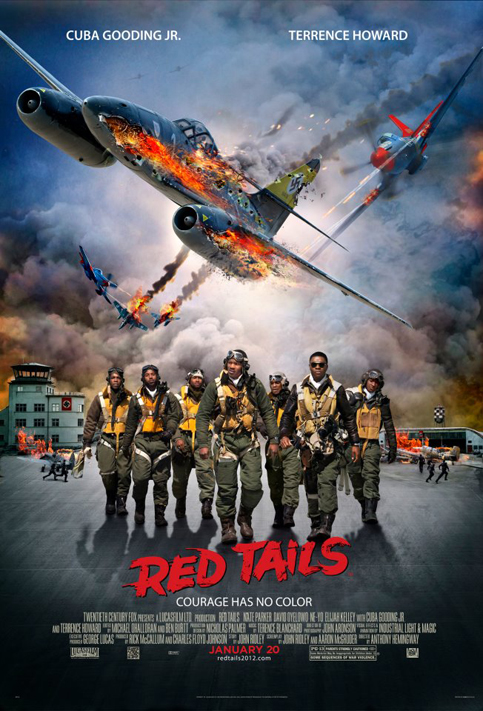 [/media-credit]In spite of Hollywood’s characteristic reluctance to finance a production starring an all-black ensemble, executive producer George Lucas and director Anthony Hemingway have teamed up and dished out a film that loudly and proudly portrays the war efforts of the infamous Tuskegee Airmen. Red Tails is likely to disappoint history buffs and Lucasfilm loyalists, but appreciators of big, fiery explosions and American machismo are sure to have a good time.

Lucasfilm’s latest feature bears the insignia of a classic underdog tale. Contrary to a 1925 Army War College study that concludes, “Blacks are mentally inferior to the white man, by nature subservient…cowardly…and therefore unfit for combat,” the film’s protagonists defy the fetters of de facto and de jure racism and secure a lofty perch in the history of the U.S. Air Force. Its premise even sparks memories of 1989’s Glory, which tells the story of the first formal African-American unit of the U.S. Army during the American Civil War.

While a mustached Matthew Broderick narrates Glory, Red Tails is shot from the perspective of the very victims of prejudice. The film follows the plight of Col. A.J. Bullard (Terrence Howard) and a squadron of Alabama-trained fighter pilots that the Pentagon grudgingly calls into duty in the heat of World War II. Breaking Bad’s Bryan Cranston also steps out of his yellow hazmat suit to fill in the shoes of unabashedly racist Col. William Mortamus, who uses every inch of his military influence to obstruct the institutional mobility of these airmen.

Lucas and crew successfully combine cultural elements of yesteryear to produce the illusion of setting—the lead characters sport classic bomber jackets, the vocals of the Andrews Sisters fill the air, and screenwriters John Ridley (Three Kings) and Aaron McGruder (The Boondocks) do not shy away from the use of Jim Crowisms—however, the storyline and characters that comprise the foreground to this backdrop are wholly unconvincing. It is worth noting that Hemingway neglects to address the historical context of the plot and the sociopolitical implications of the fighter pilots’ achievements. The characters simply materialize in the heart of Italy, and the film crew makes no inclusion of their training or the adversity they would have undoubtedly faced on their way to the European Theater.

The film’s baseless characters and their interactions do not quite reconcile this flimsy plot structure. Ridley and McGruder largely resort to a collection of mild extremes, including such stock characters as the martyr, the alcoholic and the loose cannon. As the airmen spout derivative lines seemingly borrowed from a five-cent comic book, the screenwriters also leave the internal conflicts of their characters unturned—the audience never grasps a firm sense of the pathos that swims beneath the jovial exterior of each character. “I hate this war” is the most the protagonists have to say in response to a skirmish with the German Luftwaffe.

Red Tails is, by nature, a crowd-pleaser. The film touts the triumphs and brawn of the American military, the racist and the objects of racism ultimately overcome their differences, and the filmmakers even tack on an impoverished love story. There is no denying Lucas’ cinematic altruism, but it is difficult to make out a substantial message through all of the CGI explosions.