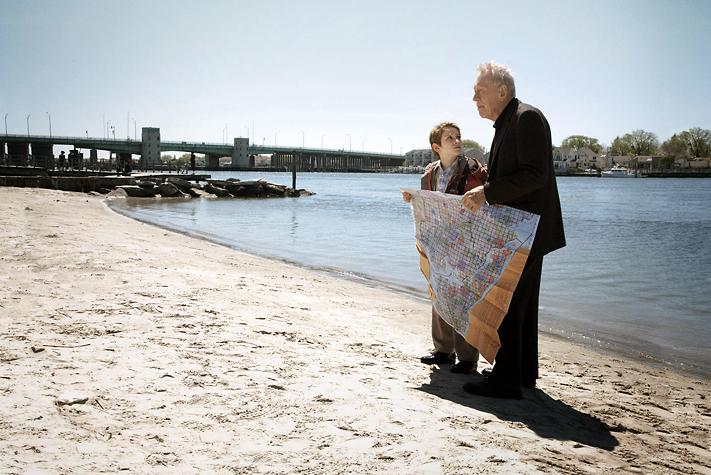 [/media-credit]The click-clack of a train rattling across a groaning steel bridge, skyscrapers reaching up into the clear blue air like the arms of giants drowning in the ground, the roar of planes like deathly birds surveying the city below — these are just a few of the loud and incredibly close noises that make nine-year old Oskar Schell anxious to a state of pain.

It has been a year since his father died in the attack on the Twin Towers (the worst day, as he calls it), and the key he found marked “Black” in his father’s closet is the only thing he can hold on to that keeps the adventurous and mischievous spirit of his father alive.

He visits the house of nearly every person with the last name “Black” in the five-borough area, searching for the answer to his key problem and trying to make sense of why his father was taken away from him. With the company of the mysterious, mute renter who lives in his grandmother’s apartment, Oskar takes off on weekends and meets a collage of over two hundred Blacks, speaking with each one and hearing a part of their life.

After an exhaustive search, Oskar returns to his first clue: to “not stop looking,” in which he discovers something new and is led to the miracle of finding what the key belongs to and yet is forced to face more disappointment and despair. The movie gives the viewer a window into the mind of a young boy’s struggles with feelings no human should have to face.

The intended audience of the film is by no means children of Oskar’s age. Director Stephen Daldry created a visual work that is similar to the mixed media of the novel, yet focuses on Oskar’s quest for closure. Thomas Horn, 14, does a yeoman’s job portraying these feelings and controlling his reactions of unrelenting frustration and grief. Casting Tom Hanks as Thomas Schell was a phenomenal call as his persona possesses such strong connotations that viewers already know they will love his character. Sandra Bullock as Oskar’s mom also does an extraordinary job tackling a highly emotional task. The cast is talented and believes in the message Daldry is sending.

To anyone who has read the novel by Johnathan Safran Foer, there is a noticeable deficit in the story of Oskar’s grandmother and the renter. In Froer’s novel, simultaneous stories are told: One of a dad who meant the world to his son and one of a dad who was not brave enough to mean a thing. The two stories intertwine and weave together providing stark comparisons, particularly of bravery and courage.

Despite missing a third of the novel, the film does not lose value or emotional sincerity. The movie is just as emotionally stirring as reading the book. The ending of the novel is fairly different that the movie’s, though: The movie’s is more optimistic and provides more closure to Oskar’s quest than the novel.

Many critics argue the movie is too “crass” and say the director used the tragedy of 9/11 to satisfy his aesthetic ideas. However, filmmakers knew what they were dealing with. Sept. 11 was an emotional day for everyone in the nation and no film will change how people feel about that day. Daldry is animating the pain that many had to go through and provides another perspective through which to see the terrible tragedy.

It is a thought-provoking story that deserves to be told. The movie draws the viewer emotionally, yet the book does a better job showing what else is going on beyond what can be shown. Ultimately, it is well worth the two hours to get extremely loud and incredibly close to Oskar and his story.