A common complaint among long-running video game franchises is that they tend to become formulaic in nature, sacrificing potential opportunities for innovation to produce a game based on a model that is known to succeed. Sometimes, though, the reason that a franchise sticks to a tried-and-true formula is that the blueprint simply works—and The Legend of Zelda: Skyward Sword is a clear example. It’s [media-credit id=15 align=”aligncenter” width=”704″] 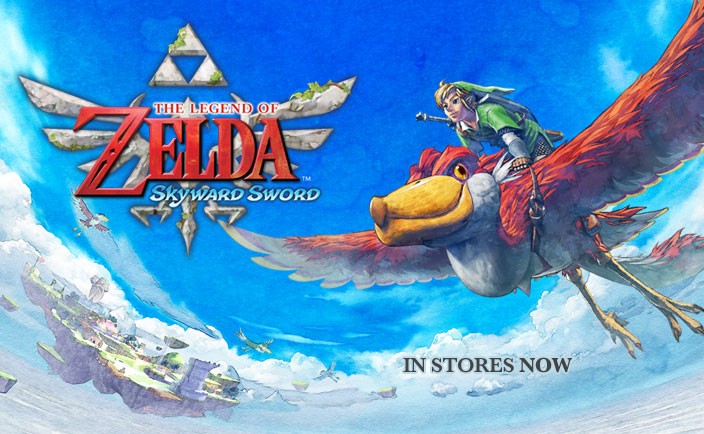 Link is growing up in Skyloft, a vibrant and prosperous community on an island in the sky where little is known about the world below the clouds. As the story commences, he is simply an aspiring student at the Knight Academy with a penchant for sleeping in and spends most of his time hanging out with his carefree childhood friend Zelda.

Skyward Sword is a game that features some incredible characters, and Zelda herself is undoubtedly one of the game’s most powerful elements. Where past games have simply employed her as an end goal, here Zelda plays a much more active role, appearing frequently throughout the game as Link scrambles to protect her. She endears herself to the player early on through her interactions with Link, and the result is that every time Link steps into Lord Ghirahim’s way to defend Zelda, it’s not merely about saving the princess—it’s about saving Link’s dearest friend.

Zelda is hardly alone in this regard. Fi, the ancient spirit that accompanies Link throughout his quest, acts almost as a scanning device in her purely scientific analysis of any given situation; at times her insistence of putting a percentage on everything is annoying, but it makes her ultimate character transformation that much more dramatic. On the other end of the spectrum, fiendish Lord Ghirahim—with the memorable and chilling piano-driven theme song that accompanies his presence, a demeanor that swings wildly between controlled fury and psychotic insanity, and an ability to step into your way at the most inopportune times—is truly one of the most creative and memorable villains the series has produced.

The frequent mentions of the game’s powerful, memorable music in this review are no coincidence: Skyward Sword is the first game in the series to feature songs produced by a full orchestra, and the game takes full advantage. From the beautiful version of “Zelda’s Lullaby”—which produces a heartbreaking moment as it becomes clear exactly why the song is called a lullaby—to the many renditions of the majestic “Ballad of the Goddess” scattered throughout the game, the soundtrack is outstanding. Some tracks disappoint, including a couple of the early dungeons, but these are few and far between compared to the themes that succeed.

Most of the game takes place on the surface (the aforementioned world below the clouds) in the beautifully designed terrain of Faron Woods, Eldin Volcano, and Lanayru Desert. Some of the elements featured in these areas are groundbreaking. The Timeshift Stones in Lanayru Desert stand out as an example, altering the environment immediately around them to appear as it did in the distant past (when the land was lush with vegetation) and shifting said environment when the stones are moved.

Instead of adding multiple new regions as the game progresses, new areas within these three regions are unlocked, and the player must combine prior knowledge of a given region with new abilities gained in order to advance through an area.

As far as game mechanics are concerned, the biggest change is the implementation of more motion-sensitive controls that take advantage of the Wii MotionPlus adapter, allowing for one-to-one sword motion and better motion controls in general. The setup is far from perfect; the Wiimote will still misinterpret swinging motions with annoying frequency and turn attempted stabs into horizontal slashes, and for certain objects that require aiming, the remote often needs to be recalibrated.

By and large, though, the system works properly, and the result is better pointing accuracy and an added dimension for in-game swordplay that forces the player to analyze an enemy’s tendencies before attacking. A large percentage of the game’s enemies take up defensive postures upon approach that force the player to swing in a specific direction to break through, and the usual fall-back method of hacking away will often backfire and get the player knocked around.

Link’s other items vary in originality, but most if not all are entertaining to use. Several staples, such as the clawshots and the bow and arrow, appear once more and are as useful as ever. Meanwhile, new items, such as the flying beetle and the whip, are added; while it seems a little cheesy to have an invincible, versatile flying beetle that can fly anywhere, there’s something just plain fun about using it as a de facto bomber aircraft to take out far-away targets.

In all cases, the most notable aspect of Link’s arsenal of tools is that all of them are useful at every stage of the game. There’s nothing like the Ball and Chain from Twilight Princess that’s essentially useless as soon as you leave the dungeon; just about every dungeon and every area between dungeons force you to tap into the entire arsenal, and in many cases multiple items are needed just to clear a single room.

The game requires intelligence and creativity to complete, but the experience is astounding and the rewards are worth the effort. Skyward Sword is one of the best games in the franchise’s rich history, setting a high standard for future Zelda games but making it a must-play for anyone familiar with the franchise.