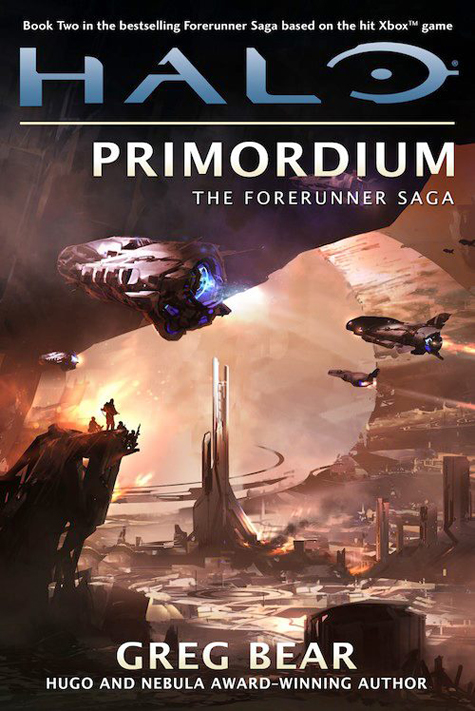 Like Cryptum, the story is an extended flashback but this time from the perspective of Chakas, one of Bornstellar Makes Eternal Lasting’s human companions in the first novel. Picking up where Cryptum left off, Chakas crash-lands on a nearby Halo ring following an attack on the Forerunner capital. Shortly after, he is brought to a human settlement where he gains two new companions, Vinnevra and Gamelpar, to help him search for his friend  lost friend, Riser.

Although Bear summarizes the events of Cryptum in Primordium, it is highly recommended that readers enjoy Cryptum first. It is the better of the two books, and for those looking for something more intellectually stimulating, it explores the idea of what it is to be human and how much of our lives are intertwined with those of others.

While Primordium has a lot to offer, it starts off slow and does not really pick up any momentum until halfway through. A lot of time is spent developing the relationships between Chakas and the inhabitants of the settlement. This section acts as dead weight that, once jettisoned, seems to make everything move much faster. This is true especially when Chakas and company begin fending off the Flood and the ring’s rampant AI. With 343 Industries’ announcement that The Forerunner Saga ties directly into the events of Halo 4, fans will be more interested in how certain revelations relate to the origins of the Precursors, the Flood, and the eventual downfall of Forerunner civilization.

Naturally, Primordium is not for everyone not to say that the book is not any good, but for something action-packed or thought-provoking, there are better examples of each. It never completely loses interest, it never warrants full attention either. All the same, those familiar with Bear’s work and Halo fans interested in the videogame’s back story will want to read Primordium.