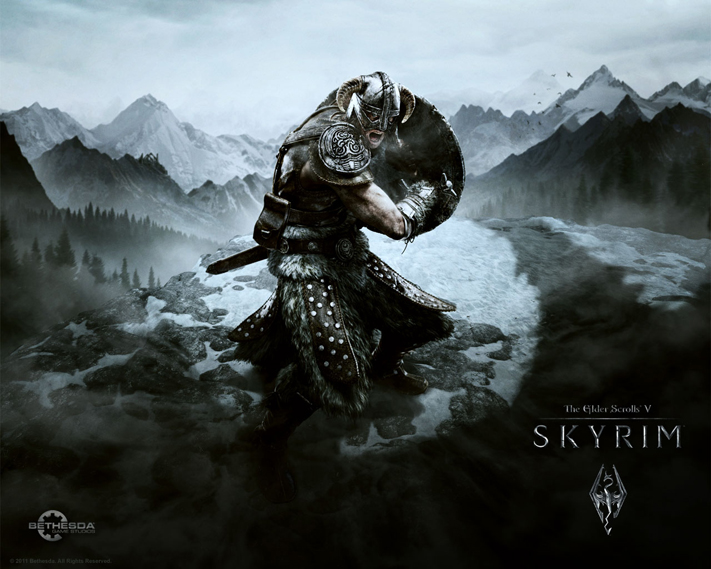 Reviewing an Elder Scrolls game is a little like trying to sum up an entire mall based on a single shopping list. Bethesda’s games are best defined by the enormity of their worlds and the staggering freedom of choice to do whatever you want in them. Aside from the central quest chain, there are dozens of dungeons to explore, numerous factions to work with, three separate crafting systems offering hours of tinkering each, and a tremendously deep character creation and customization system that allows you to play in a wide variety of ways. These factors ensure that no two players will experience the game quite the same way.

Skyrim is the fifth installment in the Elder Scrolls series, and the name of the region where the game occurs. After years of absence, dragons have returned and are terrorizing the land. You are the last Dragonborn, a mortal with an extremely rare and powerful form of magic: the ability to speak with a dragon’s voice. It is up to you vanquish the dragon threat and to solve the mystery of their sudden return—if you want to, that is. After escaping execution at the hands of the empire in the beginning of the game, you are free to explore the world as you will.

And what a world it is. Skyrim is modeled after the chilly environs of northern Europe, back when it was still primarily populated by Vikings. The game’s landmass is filled with craggy hills, towering mountain peaks, placid fjords, Nordic forests, half-frozen seas, and lots of snow. While there are verdant sections of the over world, there is a pervading sense of coldness to Skyrim that is tempered with stark beauty. This is easily the most impressive virtual representation of nature since Red Dead Redemption’s deserts and frontier land.

Although non-player characters with distinctive personalities are few and far between, the game as a whole has a unique and intriguing persona, unlike Oblivion’s bog-standard western European fantasy fare. Skyrim’s natives, the nords, are all voiced with genuine Scandinavian accents, their dress and weapons look like the brutal tools of Vikings, and their homes are stocked with hearty foods like mammoth meat, venison, and salmon steaks. This backdrop is accented by technologically advanced dwarven ruins and foreigners from the other reaches of Tamriel. While not quite as exotic and weird as weird as Morrowind, the setting is definitely intriguing.

During development, Bethesda cited Bioshock 2’s mix of magic-like plasmids and physical weaponry as a key influence on Skyrim’s combat, and it shows to great effect. You can double up on single-handed melee weaponry for frenzied hacking and slashing, pair magic with a sword, or arm yourself with two different spells at once. You can also use shields, bows, or huge two-handed weapons—or you can devote both hands to a single spell for an extra kick. Melee combat is more weighty and satisfying than in previous installments, and archery is now a formidable strategy for picking off foes even without modding.

On the whole, magic is varied and pleasing, but each school has its quirks. Destruction and conjuration magic are both effective but less creative than they could be. Alteration spells are costly. Restoration is either absurdly potent (healing spells) or hard to use effectively (wards). Finally, illusion is heavily dependent on specific situations and character builds. Despite a few duds, the Dragon Shouts are generally deeply satisfying trump-card-like abilities, which the player must unlock through a combination of dragon-slaying and exploration.

The actual battles with dragons are generally exciting, even if they fall into a rather familiar swoop-land-attack-repeat pattern. Combat in general feels fun and surprisingly strategic. Even though the mechanics are less varied than a dedicated action title, gamers’ concerns that combat would boil down to hit-and-run and hack-and-slash tactics are unfounded, as difficult fights require lots of intelligent preparation.

As far as storytelling is concerned, Skyrim is a great example of meticulous world-building. There are literally hundreds of books to be found throughout the world, fleshing out the land’s history and the lore of the elder scrolls games as a whole. In addition to the dragon threat, the land is besieged by civil war and numerous intriguing factions vie for the player’s time. Memorable and truly unique characters are few and far between however, especially when compared to Bioware and Rockstar’s casts.

With all it has to offer, there is no question as to whether you are getting your money’s worth with Skyrim. That said, the game does have several bugs and it is far from optimized, so waiting for patches, mods or a better computer may be prudent. If you are the extremely patient sort, you can wait on the inevitable Game of the Year Edition featuring all the DLC that has yet to be released. With all the buzz surrounding the title, it will be a hard wait, but Skyrim is a game people will be talking about for a long time.