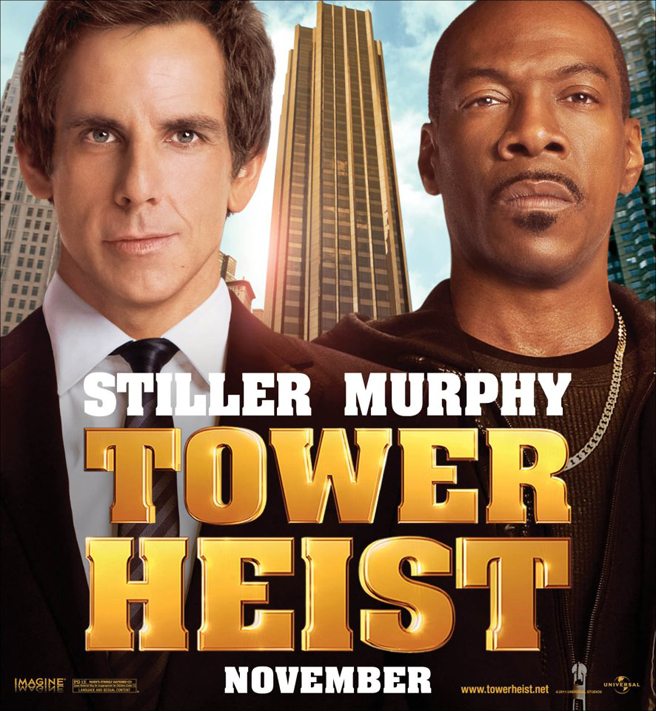 It is safe to say that over the past century, Hollywood has been cornering the market on “heist movies.” We all know the story: a group of protagonists, each with their own special talents, are in need of money and are willing to steal and con to get it. It is a mastered formula that miraculously never seems to get old and has thrilled audiences for decades. And Brett Ratner’s new comedy Tower Heist, which opened on Nov. 4, certainly looks like a classic bank robbery blockbuster on the outside. Sadly, however, for those viewers who are expecting another Ocean’s 11, Heist falls short in the areas of both plot and character depth.

The movie focuses on a group of working-class men and women who have been unlawfully swindled out of their life savings by their enormously wealthy boss, and who then vow to steal millions of dollars back from the man who conned them. As premises go, so far so good. Ben Stiller, fresh off the line from his latest comedy Little Fockers, plays the leader, the Robin Hood, of this ragtag group of misfits; however, Stiller’s normally quirky and energetic acting method comes across as rather dull and half-hearted, and as a result his scenes do not nearly live up to their potential for overall hilarity. Joining Stiller are Casey Affleck (Ocean’s 11), Michael Pena (Shooter) and where-have-you-been-for-so-long Matthew Broderick (Ferris Bueller’s Day Off). One would think that with Affleck’s experience in the Ocean’s trilogy, he would have a reasonably firm grasp of what constitutes a nice, solid bank-job movie. However, his performance in Tower Heist suggests a slightly amateur effort. Pena’s performance is easily forgettable due to the fact that he literally could have been replaced with a machine that spouted one-liners, and it would not have affected the story in the slightest. As for Broderick, his character’s bumbling yet desperate personality is not the worst; however, like his fellow actors mentioned above, the performance simply fails to produce much more than a soft chuckle.

But in addition to these weak performances, Tower Heist does possess a few redeeming qualities. And one of them comes in the form of comedy legend Eddie Murphy, who plays the one role that every heist movie truly needs: a real criminal. Fresh from prison sentence for theft, Murphy’s wisecracking character joins the gang with the hope of nabbing some easy cash, and then proceeds to save both the day and possibly the movie with his knowledge of safe-cracking and, thankfully, of entertaining an audience.

Other notably solid performances include those of both of the movie’s leading ladies.  Tea Leoni (Fun with Dick and Jane) breathes life into the role of the federal agent who is hot on the heels of the group of vigilantes; even though her screen time is cramped by a shoddy script, Leoni still manages to pull off a decent and convincing performance. Equal praise goes to Gabourey Sidibe, breakout star of the 2009 film Precious, who dives head-on into the role of the strong and street-smart maid in cahoots with the group of amateur criminals.

All in all, though, there is not much to be said about Tower Heist. Neither its jokes nor its storyline is in any way memorable, and what redeeming attributes it may possess are buried beneath the massive amount of lifeless performances given by most of the cast. The all-star cast will undoubtedly attract audiences for a single viewing, but that is all it warrants.