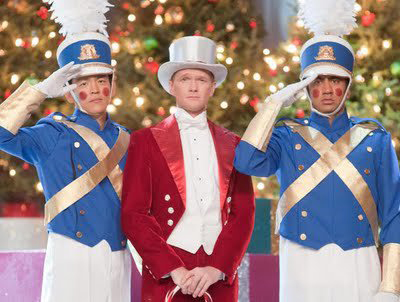 A Very Harold & Kumar 3D Christmas continues the low-brow trend from the previous two installments of the stoner-comedy franchise, returning to the original’s mundane ridiculousness and eschewing the sequel’s jet-setting sensibilities. The leads are as likable as ever an even more relatable to the target (post-)college audience. The humor is mostly, well, entirely, geared towards the males of the audience. The 3D aspect of the movie is exploited and made fun of extensively by the filmmakers, knowing it is a gimmick and poking fun of it while using it cleverly. Harold & Kumar aims low  and keeps focused, which makes it perfect, for those who don’t mind 3D genitals.

The movie’s plot is very simple; it takes place in one night as Harold and Kumar try to procure a Christmas tree on Christmas Eve. The simple premise lets the film focus on the situations and characters rather than on a complex story or societal change. The first sequel, Harold & Kumar Escape from Guantanamo Bay, tries half-heatedly to make hazy statements about some serious issues like racial profiling, the Patriot Act and the Geneva Conventions. A stoner/buddy comedy is not the place for such grandstanding, a lesson well learned as this latest installment focuses strictly on what makes the original hilarious: jokes about bodily functions and the joys and perils of drug use. And of course, Neil Patrick Harris reprises his character: Neil Patrick Harris.

Harold and Kumar have grown up a little by the movie’s start, well, Harold has, and this has caused a schism between the two. Harold is trying to please his wife’s father and Kumar is… finding himself. Both of these situations are very similar to what the original’s college-age audience seven years ago may be currently experiencing. Both characters are instantly relatable to most of the audience as they are trying to grow up. Paired with the lead actors (John Cho and Kal Penn) surprisingly subtle and endearing portrayal of the recognizable characters leads to an engrossing experience for the audience.

This movie has the very clear goal of making the audience laugh without too much thought. It wastes no time in getting to the publicly taboo subjects like racial stereotypes, giving drugs to children and telling grandmothers about various parts of human anatomy. The comedy is definitely low-brow. The filmmakers know it and exploit it to its fullest. This can be great for those in the audience who are not easily offended by such talk, but for many people not in school, the consistently repetitive toilet humor can quickly become tiresome. This sequel’s sequel exactly delivers on its promise to offend.

A lot of people are tired of the 3D gimmick and this film plays to it, contriving situations specifically to exploit its affordances to ridiculous results. While not constant, the occasional winks to the 3D make the potentially nauseating experience worth it

A Very Harold & Kumar 3D Christmas is indeed a very Harold & Kumar 3D Christmas. It is exactly what it promises: a silly, raunchy, feel-good time. The 3D is not really necessary, but the filmmaker know it and exploit it. This facetious tone is what makes it fun to watch and fun to laugh at, if not always with. With no political overtones or lofty aspirations, the movie focuses on flushable humor. This buddy comedy is surprisingly endearing as the characters are not flat, stock stoners, but are revealed to be familiar and engaging. All the scenes with Neil Patrick Harris as Neil Patrick Harris are divinely transcendent in their comedic genius. For the co-eds who know what they’re getting into, this movie supremely fills the void of 3D toddlers dancing in cloud of cocaine.