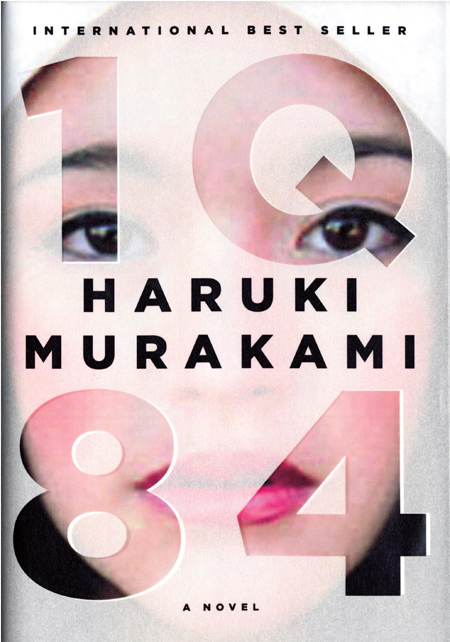 Though Murakami may not exactly be a household name for middle-America, within literary circles he has been one of the most discussed authors for many years. In his native Japan he first broke through with the coming of age story Norwegian Wood and his later The Wind-Up Bird Chronicle brought him overseas. His latest offering continues this trend of success – when released in Japan 1Q84 sold out on its first day. Two years later, after a push for a quick translation, 1Q84 becomes easily accessible to English speakers as perhaps the most hyped book in recent history not involving wizards or vampires.

1Q84 as a title is a play on Orwell’s 1984 (in Japanese 9 is pronounced “kyuu”), which is featured to some extent in the plot. However, 1Q84 is distinctly Murakami featuring the trademarks he has become known for: isolated male protagonist, ethereal teenage girl, dream-like narrative and of course cats. At over 900 pages 1Q84 is divided into three books —which were released separately in Japan and as a pair (Books 1 and 2 were released as one) in the UK.

Tengo, the male protagonist, is Murakami’s typical anti-hero – self-contained and content to passively allow whatever may come his way to take due course. He is offset by the strong willed Aomame, a female assassin who narrates the other half of Murakami’s epic. They are two people living distinct lives in 1984 Tokyo who become drawn to each other by destiny.

1Q84 begins with Aomame on her way to a job—when something out of the ordinary occurs. This alters reality and takes her into the world of 1Q84. This world is basically the same as the present only police have different uniforms, news in the past has changed and there are two moons in the sky. Meanwhile this world draws Tengo in by means of a writing job that quickly pulls him into the dangers of cults.

In 1Q84 Murakami creates a dystopian past in contrast to Orwell’s dystopian future of 1984. Murakami seemingly creates a polar opposite of Orwell’s world—a world where humanity is undermined by the working of the “Little People” rather than overseen by the omniscient “Big Brother”. Through this surreal world Tengo and Aomame slowly navigate towards each other, trying to desperately comprehend the rules of their new reality.

Murakami’s novels each deeply reflect an aspect of Japan’s history – seemingly trying to reconcile or explain both the good and the bad. 1Q84 most directly addresses social issues of religion, rape, domestic abuse, and suicide. Most interesting though is Murakami’s take on Japan’s national fear of cults. Through the fictional cults he presents in the novel, Murakami addresses the physical and psychological dangers and abuses most feared—often pointing to the thin line between religion and a cult.

In his alternate past, Murakami tackles these issues for the present and in 1Q84 creates a novel more ambitious than his previous ones, connecting Japan’s history from the aftermath of World War II to the height of the economic bubble in the 80’s. However, 1Q84 is less about Japan and as the story progresses it becomes a manifesto of the reasons why we as humans choose to live. Love, revenge, loyalty, vocation, spite, hope and divine purpose each slowly reveal themselves as Murakami’s characters discover for themselves their own rationalizations to keep or to stop living.

Though translated into English many nuances of the book may still confuse an American reader unfamiliar with Japanese culture. However, this is part of the joy and frustration of reading foreign literature. In a huge effort two translators worked separately on different sections of the novel in order to release such a large work as soon as possible. This does lead to some slight inconsistencies in style and verbiage as the reader enters the final third of the novel.

1Q84 is not a perfect novel, Murakami frustratingly sticks to using Western references, seeming to name drop obscure musicians and books that most Americans would never know much less Japanese. The pace also significantly slows in the third book as both main characters reach a stopping point in their journeys and are forced to wait. Despite this 1Q84 is a more than worthwhile read, offering an interesting look into another culture and validating Murakami as a literary genius.