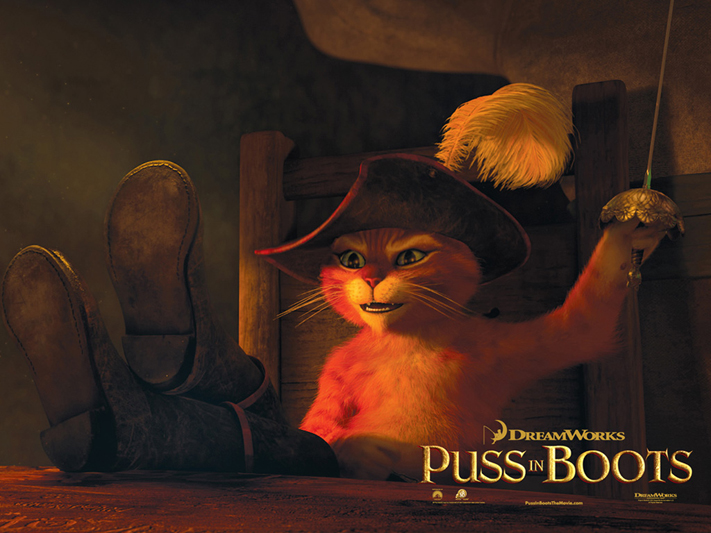 After sitting through only a few minutes of Puss in Boots, anyone expecting it to be a recycled, and therefore, lack-luster, version of Shrek will find themselves mistaken. With the exception of borrowing a character, Puss in Boots stands on its own feet and does not waste time leaning on its cash cow of a cousin. Puss in Boots is a sufficiently entertaining romp through the nursery rhymes of childhood, with a little more adventure thrown in for excitement’s sake.

The title character is a mischievous, womanizing bandit—a Cat-sanova, if you will—who reunites with an old friend, Humpty Dumpty, to chase a childhood dream: capturing a goose that lays golden eggs.  Of course, the goose is locked away in a giant’s sky-castle that can only be reached by climbing a beanstalk grown from magical beans, currently in the hands of a more terrifying than anticipated twosome, Jack and Jill.

One of the few things Puss in Boots shares with the Shrek franchise is its stylistically quick and constant references to culture; in the latter the references are to pop culture, while in the former, the little details are taken from classic nursery rhymes and fairy tales. At one point, Jill says to Jack, “Ever since you fell down that hill and broke your crown, you been talking crazy.” The frequent allusions are easy to pick up on and indicate that the movie was intended for younger audiences.

A solid cast greatly contributes to the movie: Antonio Banderas sounds as if he was born to play a swashbuckling cat, Zach Galifinakis is wonderfully believable as the conniving Humpty Dumpty and Salma Hayek naturally voices the role of Kitty Softpaws, the alluring feline who can steal anything. Billy Bob Thorton and Amy Sedaris also contribute the most entertaining vocals in their respective roles of Jack and Jill, whose portrayal as murderous, glorified bumpkins is unexpected, but definitely welcome.

Visually, Puss in Boots is breathtaking. The characters spend a significant amount of time traipsing through the Spanish desert and at one point venture into the cloud-filled sky. Both settings give the animators a chance to show off—the sceneries are nothing short of beautiful. Perhaps the best animated character is Humpty Dumpty, who is convincingly personable in a very human way, right down to the wrinkles that appear between his eyes when he contracts his forehead.

Stunning animation and good voice-overs aside, Puss in Boots is indistinguishable from other children’s movies. There are predictable plot twists and cat jokes galore (the movie could not ignore the phrase “Who let the cat out of the bag?”).

All in all, there is not a whole lot that serves to challenge or inspire the viewer, but since when are those qualities expected of adolescent entertainment? There’s no shame in enjoying something frivolous, so if you can allow yourself to ignore a thin plot and corny jokes, you should go for it. Puss in Boots will be worth your time if you make a conscious decision not to hate it right off the bat.