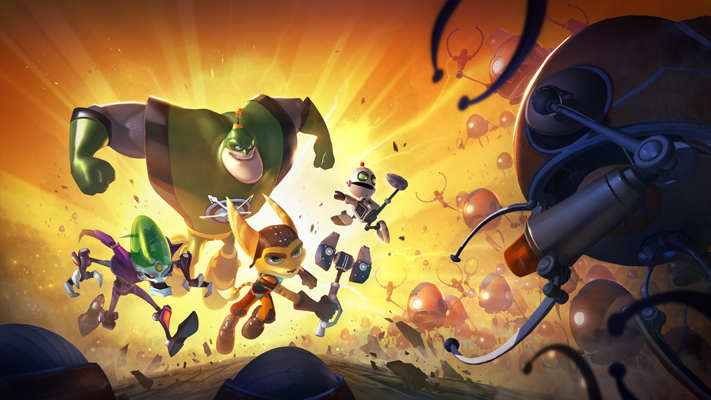 Insomniac Games has returned with another installment in its much-loved shooting platformer  franchise: Ratchet & Clank: All 4 One. Two years after A Crack in Time, Dr. Nefarious is executing yet another a diabolical plot to put Ratchet and Clank out of commission for good, but when the plan backfires, our dynamic duo find themselves stranded on an alien planet with Captain Qwark and Dr. Nefarious in tow. And herein lies the premise of the game: four-player co-op.

With so many players on screen, game play can become a bit hectic, but it’s far more satisfying than gunning it out alone. Team work is made to be necessary but enjoyable through various puzzles and combo attacks, the most prominent being the Overload mechanic which basically causes extra damage and explosions when players target the same enemy with the same weapon. My favorite gadget was the Vacuu-4000, serving as a high-powered vacuum that can suck in bolts (in-game currency), enemies and explosives (to be launched at other enemies and explosives), and even your allies (who can then be launched to other platforms, or off the edge entirely if you’re feeling particularly spiteful.)

However, All 4 One has all the problems you would expect of a third-person, co-op oriented shooter: fixed camera angles, a frustrating lock-on system, and a number of online glitches. That being said, these cons are typically overshadowed by a well-paced story and overall, engaging experience. As far as number of players is concerned, two allows you to enjoy the finer points of the game without being overwhelmed with everything that’s going on, but if you don’t mind the chaos, then however many people can fit into your living room. Single player exists, but I wouldn’t suggest playing it much since it partners you with an AI who, while decent, still pales in comparison to a human companion; it isn’t all that bad, but it isn’t particularly exciting either.

Although it’s to be expected, the drop-in/drop-out co-op comes at the price of extremely linear game play. What’s more, in order for a player to actually drop-in or drop-out, the entire group is forced to restart from the last check point so the level can readjust to the new party size. The weapons, instead of being upgraded by use, are upgraded with bolts, resulting in preference choices that prevent the Overload feature from even coming into play for most weapons late game. Of course the chemistry between characters and over-the-top voice-acting fits well with the series’ trademark humor, but as far as visuals are concerned, I was hoping for more detailed from scripted camera angles. In spite of these hiccups there’s some definite replay-ability, the short campaign compensated for by characters leveling separately and each of them possessing a unique weapon: Ratchet his Dopplebanger (a decoy punching bag with a rocket launcher), Clank his Zoni Ray (bullet time in a bottle), Qwark his Quantum Deflector (becomes a human shield), and Nefarious his Cloaker (invisibility is cool too, I guess).

Even though the co-op experience is a fairly foreign concept for Insomniac Games, they do a good job of incorporating it into their already tried-and-true formula, albeit at the cost of watering it down some. At times, All 4 Oneplays almost like a party game so veterans of the series may find themselves wanting, but younger gamers will probably feel right at home. Older players may find more to enjoy in Arkham City or Skyrim.